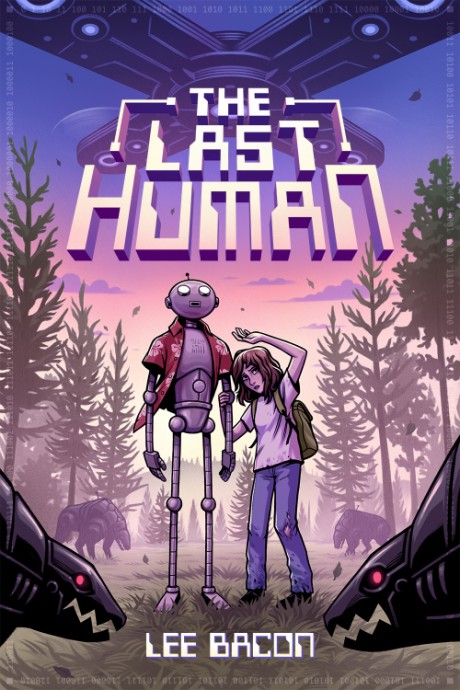 Soon to be a major motion picture from the producers of Spider-Man: Into the Spider-Verse! In a future when humans are believed to be extinct, what will one curious robot do when it finds a girl who needs its help?

In the future, robots have eliminated humans, and 12-year-old robot XR_935 is just fine with that. Without humans around, there is no war, no pollution, no crime. Every member of society has a purpose. Everything runs smoothly and efficiently. Until the day XR discovers something impossible: a human girl named Emma. Now, Emma must embark on a dangerous voyage with XR and two other robots in search of a mysterious point on a map. But how will they survive in a place where rules are never broken and humans aren’t supposed to exist? And what will they find at the end of their journey? Humorous, action-packed, and poignant, The Last Human tells a story about friendship, technology, and challenging the status quo no matter the consequences. It’s not just about what it means to be a robot—it’s about what it means to be a friend.

"An amusing and upbeat adventure, with glimpses of a fading human footprint on the planet and a suggestion that there's hope for a shared AI and human future."
— Kirkus Reviews

"In this enjoyable sci-fi adventure, the stakes are believable and high, and the robots’ interactions are humorous, sometimes mixed up for comedic effect. Against a timely backdrop, Bacon (the Joshua Dread series) explores messages of friendship, tolerance, and cooperation with wit and thoughtfulness."
— Publishers Weekly

"Bacon’s story is full of twists and adventure, leaving readers guessing throughout. . . Recommended for fans of thrilling sci-fi with a strong ethical motif."
— School Library Journal

"Navigates experiences of culture clash, morality vs. legality, and friendship that will resonate with young readers in a changing world... An especially quick and rewarding read."
— The Bulletin of the Center for Children's Books

The Last Human Teaching Guide by Abrams Books on Scribd

Lee Bacon is the author of several books for young people, including the Joshua Dread and Legendtopia series, as well as the original audio story The Mystery of Alice. His books have been translated into twenty-three languages. Lee grew up in Texas and now lives in New Jersey.