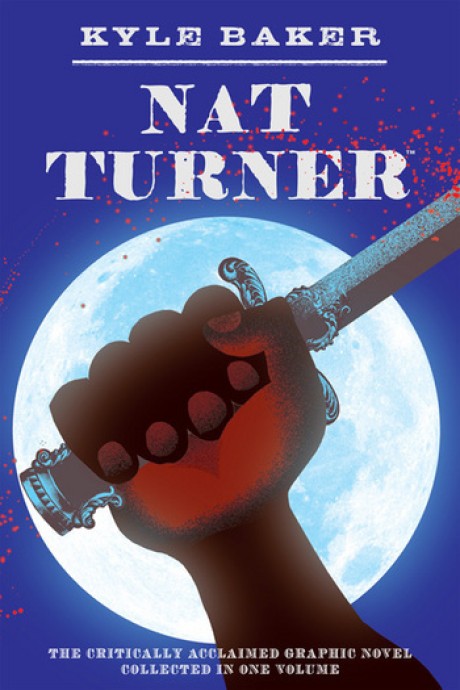 The fascinating and action-packed true story of an American freedom fighter, written and illustrated by Kyle Baker as a graphic novel—collecting all four issues of his critically acclaimed miniseries.

The story of Nat Turner and his slave rebellion—which began on August 21, 1831, in Southampton County, Virginia—is known among school children and adults. To some he is a hero, a symbol of Black resistance and a precursor to the civil rights movement; to others he is monster—a murderer whose name is never uttered. In Nat Turner, acclaimed author and illustrator Kyle Baker depicts the evils of slavery in this moving and historically accurate story of Nat Turner’s slave rebellion. Told nearly wordlessly, every image resonates with the reader as the brutal story unfolds.

Find teaching guides for Nat Turner and other titles at abramsbooks.com/resources.

This graphic novel collects all four issues of Kyle Baker’s critically acclaimed miniseries together for the first time in hardcover and paperback. The book also includes a new afterword by Baker.

“Baker’s drawings are worthy of a critic’s attention.”—Los Angeles Times

“Baker’s suspenseful and violent work documents the slave trade’s atrocities as no textbook can, with an emotional power approaching that of Maus.”—Library Journal, starred review

Kyle Baker has authored more than 15 graphic novels and illustrated hundreds more in a career that extends over three decades. He is the winner of eight Eisner Awards and four Harvey Awards, among others. A pioneer in the graphic novel format since the 1980s, Baker helped define and evolve the medium with works such as Nat Turner, Why I Hate Saturn, and King David. Other titles include The Cowboy Wally Show; Truth: Red, White & Black; and Birth of a Nation. Baker has lectured at Dartmouth, Howard University, the Library of Congress, and the School of Visual Arts, and he regularly teaches homeless teens for the City of New York.