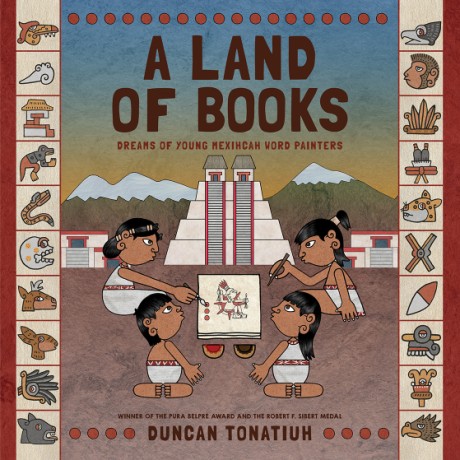 A Land of Books

Our world, little brother, is an amoxtlalpan, a land of books.
In the jungles where the jaguar dwells, the Mayas make books.
In the mountains the cloud people, the Mixtecs, make them as well. So do others in the coast and in the forests.
And we the Mexica of the mighty Aztec empire, who dwell in the valley of the volcanoes, make them too.

A young Aztec girl tells her little brother how their parents create beautiful painted manuscripts, or codices. She explains to him how paper is made from local plants and how the long paper is folded into a book. Her parents and others paint the codices to tell the story of their people’s way of life, documenting their history, science, tributes, and sacred rituals.

Duncan Tonatiuh’s lyrical prose and beloved illustration style, inspired by the pre-Columbian codices, tell the story of how—contrary to the historical narrative that European colonizers bestowed “civilization” and knowledge to the Americas—the Aztec and their neighbors in the Valley of Mexico painted books and records long before Columbus arrived, and continued doing so among their Nahua-speaking descendants for generations after the Spanish Conquest. From an award-winning author-illustrator, A Land of Books pays tribute to Mesoamerican ingenuity and celebrates the universal power of books.

**STARRED REVIEW**
"Tonatiuh’s respect and reverence for the subject shine through loud and clear as he shares knowledge of Mesoamerican books almost lost to the past. . .Utterly indispensable."
Kirkus Reviews —

**STARRED REVIEW**
"Once again Tonatiuh has gathered history, language, and stories into a cultural gift to readers; an excellent book for students who want to learn how books are made, those who love history (even the difficult parts), and anyone interested in learning about Mexihcah culture."
School Library Journal —

**STARRED REVIEW**
"A loving and layered examination of culture, values, and the stories that shape them."
The Bulletin of the Center for Children's Books —

"Acclaimed author and illustrator Tonatiuh’s signature pre-Columbian illustrations are striking and alive with color, pattern and texture. A detailed author’s note, glossary (with pronunciation guide), and bibliography round out this robust resource."
Booklist —

Duncan Tonatiuh (toh-nah-tee-YOU) is an award-winning author-illustrator. He is both Mexican and American. He grew up in San Miguel de Allende, Mexico, and graduated from Parsons School of Design and Eugene Lang College in New York City. His artwork is inspired by pre-Columbian art. His aim is to create images and stories that honor the past, but are relevant to today's people, especially children. He currently lives in San Miguel with his family but travels in the United States often.