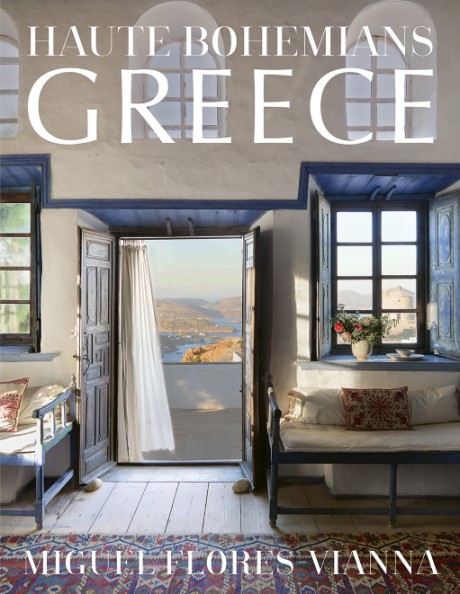 A glorious, intimate homage to this magical country from bestselling photographer and writer Miguel Flores-Vianna

A land immortalized by poets for its otherworldly beauty, Greece is the birthplace of iconic monuments that are known the world over. Yet, at the same time, it is also home to an organic architectural language, the product of centuries of rural and island lifestyles—it is the heir both to the timelessness of classical architecture and the simplicity of rustic living.

This stunning volume chronicles Miguel Flores-Vianna’s photographic odyssey through the beautiful Greek landscape, showcasing historical houses alongside contemporary homes, united by the colorful characters who either live or have lived in these places—the “haute bohemians.”

From the sophisticated residences of collectors and painters to island hideaways, centuries-old tavernas, royal follies, breathtaking gardens and even a restored sailboat, Flores-Vianna transports his armchair travel companions to a wondrous world, bathed in the glow of an ethereal light. An extraordinary range of characters emerges—including historic figures such as the shepherd Alexandros Rodakis and Queen Amalia, and contemporary creatives such as antique dealer Eleni Martinou and architect Katerina Tsigarida. Featured, too, are the homes of international residents who share a passion for this magical land, such as interior designer John Stefanidis, artists Helen and Brice Marden, and financier and philanthropist Jacob Rothschild.

A self-confessed “Hellenophile” who has visited Greece countless times since his childhood, Flores-Vianna invites us to join him in paying tribute to his beloved adopted nation, capturing the character and patina of this enchanting country through his trademark intimate, atmospheric photography, and engaging texts.

Miguel Flores-Vianna has been a photographer, writer, and editor for more than 20 years. He is the author of the bestselling Haute Bohemians, selected as the design book of the year by the New York Times T magazine, and A Wandering Eye: Travels with My Phone. His photography has been featured in a number of other books, including Near and Far by Lisa Fine, Décors Barbares by Nathalie Farman-Farma, and At Home by Isabel López-Quesada, and he is a regular contributor to magazines such as Cabana and AD. He lives in London.