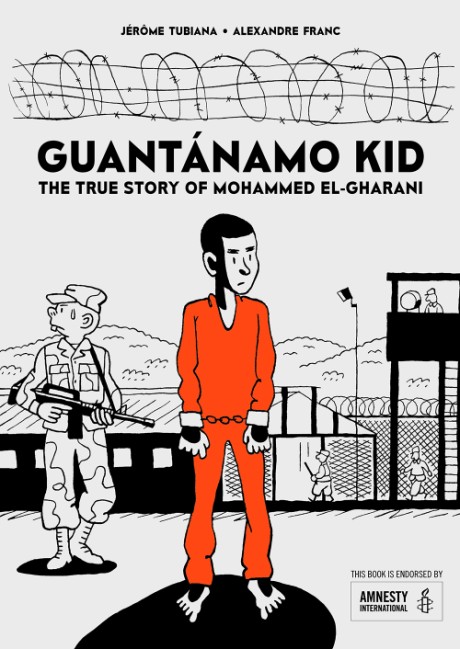 The True Story of Mohammed El-Gharani

Saudi Arabia offers few prospects for the bright young Mohammed El-Gharani. With roots in Chad, Mohammed is treated like a second-class citizen. His access to healthcare and education are restricted; nor can he make the most of his entrepreneurial spirit. At the age of 14, having scraped together some money as a street trader, Mohammed seizes an opportunity to study in Pakistan. One Friday in Karachi, Mohammed is detained during a raid on his local mosque. After being beaten and interrogated, he is sold to the American government by the Pakistani forces as a member of Al-Qaida with links to Osama Bin Laden, but Mohammed has heard of neither. The Americans fly him first to Kandahar and then to Guantánamo Bay.

In Guantánamo Kid, Jérôme Tubiana and Alexandre Franc tell the eye-opening, heart-wrenching story of one of Guantánamo’s youngest detainees. Written in collaboration with Mohammed El-Gharani, Guantánamo Kid reflects as closely as possible his memories and experiences of life in the camp.

"With the Trump administration signing an executive order to keep the prison open indefinitely in 2018, it is more important than ever to read stories like Guantánamo Kid"
Amnesty International UK —

"Mohammed El-Gharani knows all about the horrors of Guantánamo, as a child subjected to torture by the US authorities and held in the prison for eight years. And yet far too many people still don’t know about Guantánamo’s long and abusive history, and one main reason is that no footage or photos of any of the torture and abuse has ever surfaced. Overcoming this critical lack of images, Jérôme Tubiana, a journalist who spent time with Mohammed after his release in 2010, hearing his story, has worked with the talented comic artist Alexandre Franc to bring his ordeal to life in a graphic novel that deserves to be read as widely as possible, as, in page after page of harrowing memories, Mohammed tells his story with wit, endurance and unbreakable spirit."
Andy Worthington (campaigner, journalist and author of The Guantánamo Files) —

"Mohammed El-Gharani was just 14 when he was kidnapped and rendered to Guantánamo Bay, the location of some of the worst human rights abuses of our age. There, he was detained without charge or trial, facing brutal torture, isolation and mistreatment. The US accused him of having been an Al-Qaeda mastermind at the tender age of 6 in a country he had never visited, and his story exposes the cruel absurdity of the US' Guantánamo project and the faulty ‘intelligence’ it was built on. Yet, despite all this, his is a story of survival in even the darkest of times. Guantánamo Kid is a book everyone should read – an innovative, visually stunning way of telling an important story. And a powerful way to remind us that the Guantánamo story is one that is still being played out to this day as 40 men continue to languish in the prison, watching the months and years pass by with no access to justice and very little hope for freedom."
Clive Stafford Smith, founder of Reprieve and Mohammed El-Gharani's lawyer —

Jérôme Tubiana is a journalist and researcher. He has contributed to National Geographic, Foreign Affairs, and Foreign Policy, among other publications. Alexandre Franc is the creator of more than a dozen graphic novels, including Agatha: The Real Life of Agatha Christie.