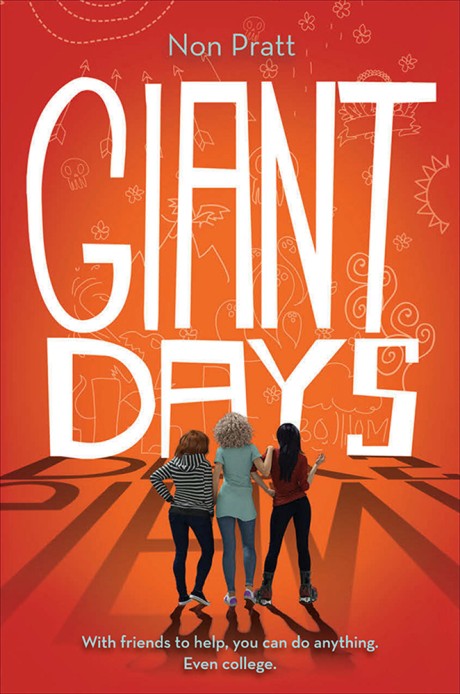 Based on the hit graphic-novel series from BOOM! Studios, the publisher behind Lumberjanes, Giant Days follows the hilarious and heartfelt misadventures of three university first-years: Daisy, the innocent home-schooled girl; Susan, the sardonic wit; and Esther, the vivacious drama queen. While the girls seem very different, they become fast friends during their first week of university. And it’s a good thing they do, because in the giant adventure that is college, a friend who has your back is key—something Daisy discovers when she gets a little too involved in her extracurricular club, the Yogic Brethren of Zoise. When she starts acting strange and life around campus gets even stranger (missing students, secret handshakes, monogrammed robes everywhere . . .), Esther and Susan decide it’s up to them to investigate the weirdness and save their friend.

"Pratt (Trouble) adeptly tackles a narrative adaptation of John Allison’s hit graphic novel series by the same name....Fans of the comic will delight in further character development...but even those unfamiliar with Allison’s work will enjoy the story’s humor and exploration of universal themes, including what it means to find and define oneself during the first year away from home."
— Publishers Weekly

"With its wry, comics-inspired humor, the action is dramatically silly, but it's a rollicking grrrl-centered good time. The author captures the minute details of university life with uncanny accuracy . . . Great fun."
— Kirkus Reviews

"An exaggerated and comedic take on the first time away from home, there are numerous times teens will laugh out loud . . . Fans of Julie Murphy’s Dumplin’ or Lance Rubin’s Denton Little’s Deathdate will find this equally enjoyable."
— School Library Journal

"The idiosyncratic characters are endearing, and the power and strength of female bonding comes through loud and clear."
— Booklist

"The 'hilarious and heartfelt' misadventures of three fierce and funny young women in their first year of university. Based on the graphic novel series."
— The Bookseller

Non Pratt is a British author whose debut novel, Trouble, was short-listed for the YA Book Prize and the Branford Boase Award and long-listed for the Carnegie Medal. Her other books include Remix, Unboxed, and Truth or Dare. She lives in London.