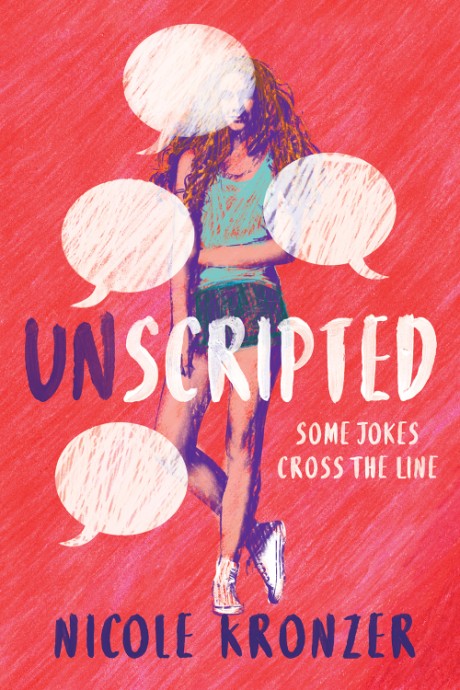 Seventeen-year-old Zelda Bailey-Cho has her future all planned out: improv camp, then Second City, and finally Saturday Night Live. She’s thrilled when she lands a spot on the coveted varsity team at a prestigious improv camp, which means she’ll get to perform for professional scouts—including her hero, Nina Knightley. But even though she’s hardworking and talented, Zelda’s also the only girl on Varsity, so she’s the target for humiliation from her teammates. And her 20-year-old coach, Ben, is cruel to her at practice and way too nice to her when they’re alone. Zelda wants to fight back, but is sacrificing her best shot at her dream too heavy a price to pay? Equal parts funny and righteous, Unscripted is a moving debut novel that Printz Award winner Nina LaCour calls “a truly special book, written at exactly the right time.”

“Smart, funny, and completely riveting. Nicole Kronzer fearlessly dives into the misogyny of the comedy world to tell a profound story of a sharp, talented girl thwarted at every turn by a patriarchal institution that makes no space for her. A powerful and necessary read for all genders.”
Lance Rubin, author of Crying Laughing and Denton Little's Deathdate —

"This is a well written story that provides insight into the development of an abusive, narcissistic relationship and the power of standing up for yourself."
School Library Connection —

"Kronzer skillfully brings to life the improv setting. The characters are authentic and friendships seem real. . .  The humor of improvisation does not detract from the powerful messages of consent and gender equality, but rather adds some lighthearted moments to a serious plot."
School Library Journal —

"Kronzer deftly combines what it means to be a female in comedy with a story of contemporary resonance that evokes the #MeToo movement."
Booklist —

Nicole Kronzer is a former professional actor and improvisor who now teaches English and creative writing. She loves to knit and run (usually not at the same time) and has named all the plants in her classroom. She lives with her family in Minneapolis. Visit her online at nicolekronzer.com.