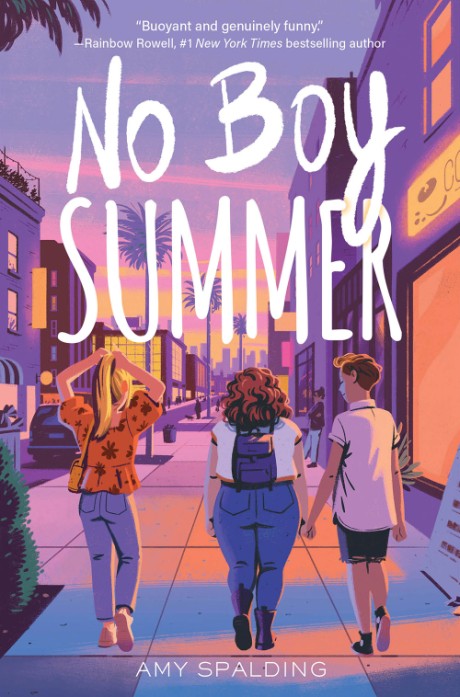 Lydia Jones and her younger sister Penny have had it with boy drama. Last year was marred by relationship disasters for both of them, threatening Lydia’s standing with her school’s theater tech club and Penny’s perfect GPA. Penny has, naturally, diagnosed the problem and prescribed a drastic solution: a summer off from boys.

Lydia and Penny decide to stay with their Aunt Grace and her boyfriend Oscar in Los Angeles while their parents are off on a European cruise. Penny follows her future-business-school dreams with an internship at Oscar’s office, and Lydia gets a part-time job at Grace’s neighborhood coffeeshop, Grounds Control.

Even when they spent hours, days, weeks dissecting their various boy drama, Lydia’s never felt this connected to her sister before, and it makes her wonder what else in her life could be different. She finds herself drawn to a group of friends she meets through her Grounds Control coworker, Margaret, as well as an intriguing customer, Fran, an aspiring filmmaker and—while not the first girl Lydia finds herself attracted to—the first girl who has mutual feelings for her. But she’s not breaking her pledge to Penny, right? That was just about boys. Even though in her heart Lydia knows she’s bending the rules, she hasn’t had a connection with anyone as strong as her connection with Fran, so she thinks it can’t be wrong. And Penny won’t mind as long as she’s happy . . . Right?

“No Boy Summer is the perfect summer hangout book—warm, witty, and heartfelt. Watching Lydia turn into a person who's more than the sum of her romantic relationships is an empowering, relatable journey.”
Mary McCoy, award-winning author of Indestructible Object —

“I want to spend every summer with Amy Spalding's characters. Thoughtful, funny, and a great escape from whatever ails you.”
Sara Farizan, author of Tell Me Again How a Crush Should Feel —

“Lydia’s relationship validates the bisexual experience through an enjoyable romance. This body- and sex-positive story will hold readers’ interest until it eventually reaches its satisfying conclusion. A cute, queer romance plus a sweet exploration of the special bond between sisters.”
Kirkus Reviews —

Amy Spalding is the author of several novels, including Kissing Ted Callahan (and Other Guys), The Summer of Jordi Perez (and the Best Burger in Los Angeles), and We Used to Be Friends, which Becky Albertalli called “complex, earnest, and unflinching.” She lives in Los Angeles.