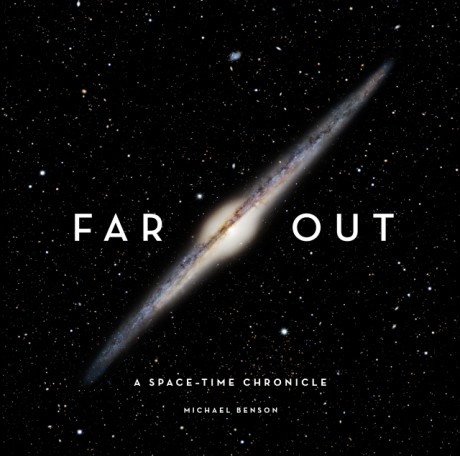 Buy
Far Out
A Space-Time Chronicle
By Michael Benson

In Far Out: A Space-Time Chronicle, author and filmmaker Michael Benson assembles an outstanding collection of astronomical images from observatories around the world and in space. We live in a golden age of astronomical observation. Some of the resulting images are well known and have inspired millions of people; others, equally breathtaking, have never been published before. For this book, Benson has culled the very best, and organized them into a thrilling journey through space and time to the universe's great places, ranging from "nearby" nebulae in our own Milky Way galaxy to the light of the Hubble Deep Field that has traveled billions of light-years.

Every bit as innovative and beautiful as the author's successful Beyond: Visions of the Interplanetary Probes but far grander in conception, Far Out is an inspiring work of art and science on the cutting edge of human perception.

A Guide to the Cosmos, in Words and Images Dazzling and True ­–New York Times Book Review

[With Far Out] Take a good long look into space-time. –Los Angeles Times

Far out by Michael Benson proves that putting the photographable universe into a book doesn’t dampen its beauty. – Men’s Journal

“2001: A Space Odyssey and Far Out: A Space-Time Chronicle: both are inspirational moving pictures. Far Out punches deep into space, like a series of jump cuts. It is a truly cinematic experience to see these magnificent images in rapid succession. Like the Star-Child in Stanley Kubrick’s vision of a Mankind evolving to a higher level, Far Out inspires me again to imagine a Universe filled with life, and each of those billions of pinpoints being orbited by worlds and beings of breathtaking beauty. Very moving pictures.”
—Douglas Trumbull, Oscar-winning Visual Effects Supervisor, 2001: A Space Odyssey, Blade Runner, Close Encounters of the Third Kind and Star Trek, The Motion Picture

“The inventive, imaginative Michael Benson here unfolds the universe in its multiple dimensions.”
—Dava Sobel, author of Longitude, Galileo’s Daughter, and The Planets

“That the images in Michael Benson’s latest book, Far Out, are completely mind-blowing goes without saying. What’s especially dazzling about this volume, though, is the way Benson’s text takes the shards of those blown minds and completely reconfigures them into such a startlingly new and fresh awareness: a trembling awe all its own.”
—Lawrence Weschler, author of Everything That Rises and Seeing Is Forgetting the Name of the Thing One Sees

“First he gave us the beauty of our solar system’s neighbor worlds in Beyond: Visions of the Interplanetary Probes, but Michael Benson hasn’t stopped there. In this spectacular new offering he gives us the universe itself, presented in such stunning and vivid detail that I am awed by every page. Open this book, take the journey, and be amazed.”
—Andrew Chaikin, author of A Man on the Moon and A Passion for Mars

Michael Benson is a journalist, filmmaker, and photographer. His book Beyond: Visions of the Interplanetary Probes (Abrams) saw print in five languages and won a First Prize for Design award at the 2004 New York Book Fair. He has contributed articles to the New Yorker, the Atlantic, the New York Times, and the Washington Post. He lives in Ljubljana, Slovenia.