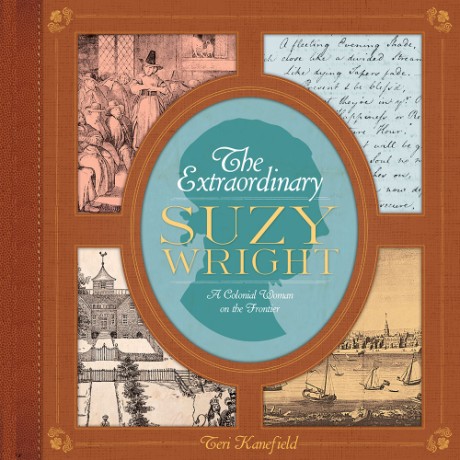 A Colonial Woman on the Frontier

Children are taught much about the men who shaped early America, but history-shaping colonial women remain largely unknown and undiscussed. The Extraordinary Suzy Wright sets about to change that, telling the little-known story of Quaker Susanna (Suzy) Wright (1697–1784), a renowned poet and political activist. Suzy helped settle the Pennsylvania frontier, where she acted as legal counselor to her less literate neighbors, preparing wills, deeds, indentures, and other contracts. Surviving documents and correspondence between Suzy and a host of her contemporaries—including Benjamin Franklin; James Logan, Pennsylvania’s governor and chief justice; and a few signers of the Declaration of Independence—reveal that Suzy, from her home on the frontier, exerted considerable influence in the highest circles of Pennsylvania government. This fascinating and inspiring story includes an author’s note, bibliography, and index.

**STARRED REVIEW**
"An excellent resource that shines a spotlight on a previously little-known but highly meritorious woman."
Kirkus —

"...In Kanefield’s beautifully produced biography, with ample reproductions, full-color photos, and page layouts rich in biographical detail and historical context, both Suzy and her time and place come to life... As presented here, her story also serves as model to
contemporary readers: it promotes valuing women and non-Europeans as equals, seeking diplomatic methods to resolve negotiations, and engaging in a variety of endeavors—poetry as well as law and science—rather than pursuing a single interest or concern. Excellent for browsing as well as research and discussion."
Booklist —

**STARRED REVIEW**
"This biography of Suzy Wright is a welcome addition to the very crowded collection of early American history books and a rare example of a work that highlights a groundbreaking Colonial woman...Providing a different perspective on a very familiar time in the United States, this is an excellent look at a little-known but important woman."
School Library Journal —

"The story is presented in a beautiful package replete with photographs of primary sources and a text liberally supported with quotations. Detailed notes, image credits, and acknowledgements speak to the exhaustive research behind this important volume."
School Library Connection —