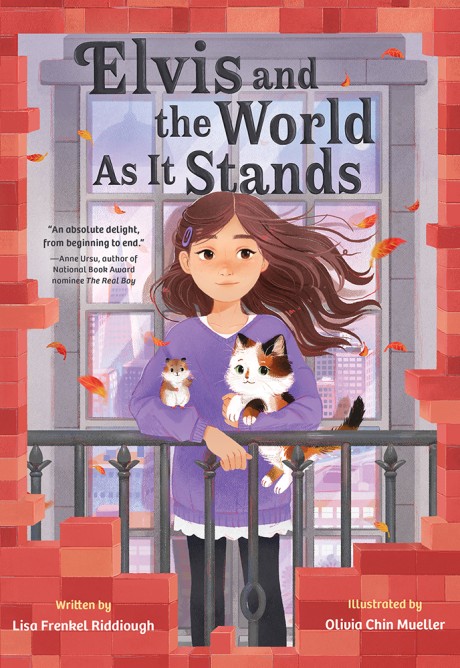 Elvis and the World As It Stands

Most shelter animals dream of going home with a forever family. But for Elvis, being chosen by Mrs. Pemberton is a nightmare. He’s been separated from his sister, Etta, and is determined to get back to the shelter to find her. In spite of himself, Elvis becomes curious about ten-year-old Georgina Pemberton, who builds LEGO skyscrapers in her bedroom while navigating her parents’ separation. The longer he’s in his new home, the more he starts recognizing new feelings: admiration for Georgina’s creations, affection for the other pets, and even empathy for the Pembertons—despite their inability to listen.

As Georgina sets out to build her most important skyscrapers yet—the Twin Towers—Elvis realizes that maybe both humans and animals can take a page from Georgina’s Big Book of American Architecture and “build a world of their own choosing,” even if the choices aren’t what they’d initially expected.

**STARRED REVIEW**
"Riddiough has lovingly crafted a group of fully realized animal characters—even a fish—as well as three sometimes-mystifying humans, all of whom share their hopes and tribulations and demonstrate that not all happy families look alike. . .This gentle effort will leave engaged readers purring contentedly."
Kirkus Reviews —

"Riddiough’s debut doesn’t shy away from sadness or struggle, including a thoughtful discussion of 9/11, with the animal antics providing a lighter framework for tough topics. A playful and poignant exploration of family, in all its forms."
Booklist —

"Readers will race to find out how everything ends, with character growth and plenty of failed escape attempts before the satisfying conclusion."
School Library Journal —

ELVIS AND THE WORLD AS IT STANDS Curriculum Guide

Lisa Frenkel Riddiough is a Northern California–based writer who earned her MFA in writing for children and young adults from Hamline University. She is a former sales executive, an avid squirrel watcher, a frequent baker of chocolate pound cake, and an exclamation point enthusiast! Elvis and the World As It Stands is her debut novel!! Olivia Chin Mueller grew up in the small town of Chester, Connecticut, and now lives in Providence, Rhode Island. She attended the Rhode Island School of Design. Besides illustrating, Olivia loves playing with her cats, raising silk moths, collecting anything cute, and sewing and felting miniature animals.