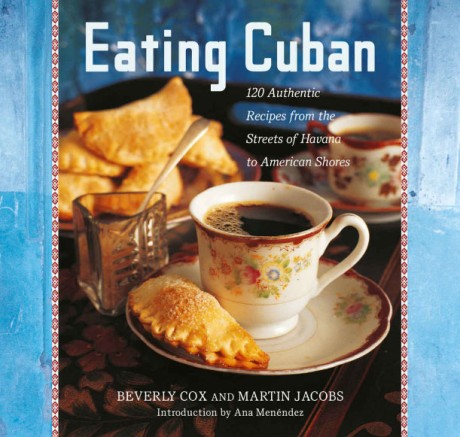 120 Authentic Recipes from the Streets of Havana to American Shores

By Beverly Cox, and Martin Jacobs

To "eat Cuban" is to savor a deliciously complex culinary culture. Spanish, Native American, African, Chinese, and French traditions have all contributed to Cuban cooking, producing a distinctive Caribbean cuisine as richly chorded as the island's music.

Beverly Cox and Martin Jacobs's itinerary takes them from the barrio, paladars (private restaurants), and chic nightspots of Havana to the eateries of Florida's emigré communities. From their journeys, they've gathered more than 120 recipes that comprehensively document Cuban cooking's diversity, from the black bean soup found on any Cuban table, to the empanadas sold by Havana's street vendors, to the grilled sandwiches that are a mainstay of Miami's Calle Ocho, to the innovative dishes devised by chefs at top Cuban restaurants.

Gorgeously illustrated with Jacobs's photographs —many shot on the authors' travels through Cuba—Eating Cuban highlights Cuban food's historical roots, the classic Creole dishes that evolved from these disparate cultural influences, current trends in Cuban cooking, street foods and on-the-go snacks, and quintessential Cuban beverages from café Cubano to the mojito. A valuable resource list helps American cooks locate the required ingredients, and a restaurant directory points the way to the very best in Cuban cuisine—in Cuba and the U.S.

Beverly Cox apprenticed with world-renowned chef Gaston LeNôtre in Paris. She has written 10 cookbooks, including STC’s Spirit of the Harvest (which won James Beard and IACP awards), Spirit of the West (an IACP award winner), and Spirit of the Earth, all coauthored with Martin Jacobs.

Martin Jacobs is an award-winning food photographer who has photographed more than 40 cookbooks. With Beverly Cox he has collaborated on numerous books and a regular column on cooking for Native Peoples magazine.

ANA MENÉNDEZ, the daughter of Cuban exiles, is the author of the short-story collection In Cuba I Was a German Shepherd (whose title story won the Pushcart Prize) and the acclaimed novel Loving Ché.