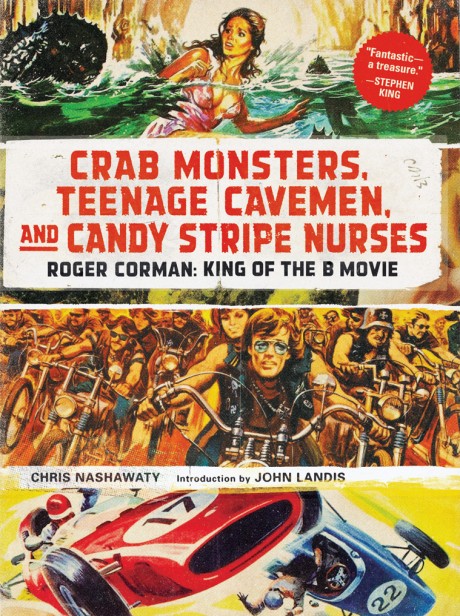 Roger Corman: King of the B Movie

Crab Monsters, Teenage Cavemen, and Candy Stripe Nurses is an outrageously rollicking account of the life and career of Roger Corman—one of the most prolific and successful independent producers, directors, and writers of all time, and self-proclaimed king of the B movie. As told by Corman himself and graduates of "The Corman Film School," including Peter Bogdanovich, James Cameron, Francis Ford Coppola, Robert De Niro, and Martin Scorsese, this comprehensive oral history takes readers behind the scenes of more than six decades of American cinema, as now-legendary directors and actors candidly unspool recollections of working with Corman, continually one-upping one another with tales of the years before their big breaks.
Crab Monsters is supplemented with dozens of full-color reproductions of classic Corman movie posters; behind-the-scenes photographs and ephemera (many taken from Corman's personal archive); and critical essays on Corman's most daring films—including The Intruder, Little Shop of Horrors, and The Big Doll House— that make the case for Corman as an artist like no other.

"This new coffee table book, brimming with outrageous stills from many of Corman's hundreds of films, looks at the wild career of the starmaker who was largely responsible for so much of the Hollywood we know today." —New York Post

"It includes in-depth aesthetic appreciations of ten of Corman's movies, which, taken together, make a compelling case for Corman as an artist." —Hollywood.com

"You'd think it'd be impossible for any writer to put together a Roger Corman biography that's anywhere near as fun as his movies, but Entertainment Weekly writer/critic Chris Nashawaty has done just that."  —Complex magazine

Chris Nashawaty is a senior writer at Entertainment Weekly. Nashawaty has also written for Esquire, Sports Illustrated, and WIRED. He lives in Connecticut.