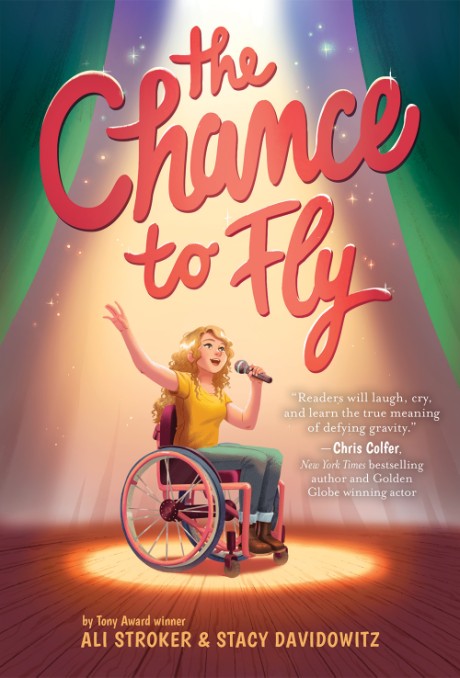 The Chance to Fly

By Ali Stroker, and Stacy Davidowitz

Thirteen-year-old Nat Beacon loves a lot of things: her dog Warbucks, her best friend Chloe, and competing on her wheelchair racing team, the Zoomers, to name a few. But there’s one thing she’s absolutely OBSESSED with: MUSICALS! From Hamilton to Les Mis, there’s not a cast album she hasn’t memorized and belted along to. She’s never actually been in a musical though, or even seen an actor who uses a wheelchair for mobility on stage. Would someone like Nat ever get cast?
But when Nat’s family moves from California to New Jersey, Nat stumbles upon auditions for a kids’ production of Wicked, one of her favorite musicals ever! And she gets into the ensemble! The other cast members are super cool and inclusive (well, most of them)— especially Malik, the male lead and cutest boy Nat’s ever seen. But when things go awry a week before opening night, will Nat be able to cast her fears and insecurities aside and “Defy Gravity” in every sense of the song title?

"Every theater kid in the world will instantly fall in love with Nat Beacon and relate to her story of perseverance. The Chance To Fly is as unique, inspirational, and full of heart as Ali Stroker is herself. She and Stacy Davidowitz will make readers laugh, cry, and teach them the true meaning of defying gravity." —Chris Colfer, New York Times bestselling author and Golden Globe winning actor

"The perfect read for any dream chaser . . . You'll realize how unlimited your possibilities are." —Kristin Chenoweth, Tony and Emmy Award winning actress and singer

"I only wish that The Chance to Fly was written when I was a teenager. Ali Stroker is a powerful role model for all youth and adults alike . . .We are living in changingtimes where audiences are clamoringfor greater diversity. A Tony Award winner whose voice soars, whose energy brings us all to cheer is an example of what is possible." —Judith Heumann, International Disability Rights Activist, author of Being Heumann: An Unrepentant Me

"A story both fine and also uplifting—in both senses of the word, moral and physical!" —Gregory Maguire, author of Wicked

"Anyone who loves to dream and has a love for theater will greatly appreciate The Chance to Fly. This book reminds everyone that it is a beautiful thing to be different and to be passionate about doing what you love." —Sophia Gennusa, Tony Honored actress for her title role in Matilda

**STARRED REVIEW** "Bolstered by realistic dialogue and Nat's engaging internal narrative, this endearing novel will entrance a new generation of theater lovers and charm older ones with its allusions to beloved shows." —Publishers Weekly

"Seeing the obstacles Nat faces daily and watching her learn to advocate for herself may inspire readers to do the same. Serious scenes, like Nat's crush Malik discussing his experience as the only Black student in school, and learning why Nat uses a wheelchair, are poignant, as is Nat's evolving relationship with her parents...Young disabled performers will be excited to see representation, and all readers will be rooting for Nat." —School Library Journal

Ali Stroker made history as the first person in a wheelchair to appear on Broadway and win a Tony Award.  She made her Broadway debut in the revival of Spring Awakening and then played Ado Annie in the revival of Oklahoma! Ali graduated from NYU Tisch School of the Arts and has starred and recurred in numerous television shows including “Glee.” Her work as a humanitarian includes speaking and performing around the world helping people with and without disabilities through her message of “Making your Limitations into Opportunities.” This is her debut novel. Stacy Davidowitz is the author of the Camp Rolling Hills series and coauthor of Camp Rolling Hills the Musical, which continues to have productions across the country. She is also the author of the Hanazuki chapter-book series based on Hasbro’s YouTube series. Stacy has written award-winning plays that have been produced regionally and internationally. When she is not writing, she teaches creative writing and musical theater in schools, foster care facilities, and juvenile detention centers. She is a graduate of Tufts University and Columbia University, where she earned degrees in drama and acting. Stacy lives in Manhattan with her husband and twin boys.