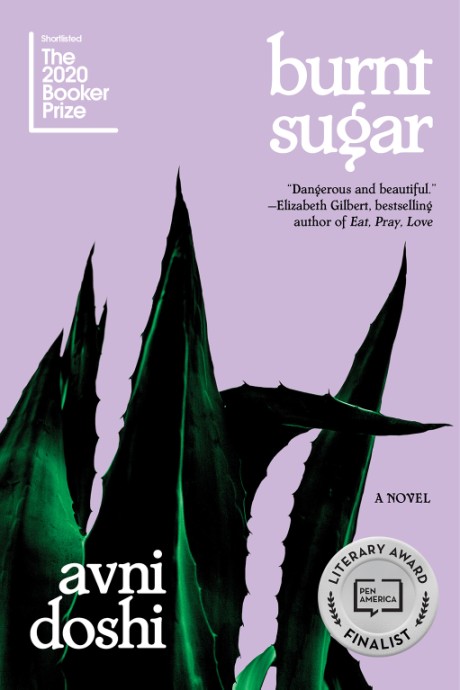 Shortlisted for the 2020 Booker Prize, a searing literary debut novel set in India about mothers and daughters, obsession and betrayal

“I would be lying if I say my mother’s misery has never given me pleasure,” says Antara, Tara’s now-adult daughter.
In her youth, Tara was wild. She abandoned her marriage to join an ashram, and while Tara is busy as a partner to the ashram’s spiritual leader, Baba, little Antara is cared for by an older devotee, Kali Mata, an American who came to the ashram after a devastating loss. Tara also embarks on a stint as a beggar (mostly to spite her affluent parents) and spends years chasing a disheveled, homeless artist, all with young Antara in tow. But now Tara is forgetting things, and Antara is an adult––an artist and married––and must search for a way to make peace with a past that haunts her as she confronts the task of caring for a woman who never cared for her.
Sharp as a blade and laced with caustic wit, Burnt Sugar unpicks the slippery, choking cord of memory and myth that binds mother and daughter. Is Tara’s memory loss real? Are Antara’s memories fair? In vivid and visceral prose, Tibor Jones South Asia Prize–winning writer Avni Doshi tells a story, at once shocking and empathetic, about love and betrayal between a mother and a daughter. A journey into shifting memories, altering identities, and the subjective nature of truth, Burnt Sugar is a stunning and unforgettable debut.

“I read Burnt Sugar with awe, fury and compassion, electrified by the question of whether time does heal all wounds, and whether it even should."
— Catherine Whelan, editor, NPR Morning Edition

“Burnt Sugar is an unsettling, sinewy debut, startling in its venom and disarming in its humor from the very first sentence.”
— Guardian

“a landmark portrait of toxic parenting and its tangled aftermath ... Dark emotions color a daughter’s complex connection to her mother in a striking first novel that delves deep into family bonds.”
— Kirkus STARRED review

“The words in Avni Doshi’s “Burnt Sugar” hit you like a bullet... Regardless of your cultural background, “Burnt Sugar” will pulse with an addictive and thrilling energy. Every sentence is a treasure to read and brings you one step closer to yourself, even though you didn’t ask for it.”
— Michigan Daily

“Burnt Sugar is an incredible novel with messages and characters that remain with its reader far beyond the final line.”
— New York Journal of Books

“With a tightly controlled narrative voice and careful use of flashbacks … This is a layered, descriptive, at times distasteful novel that brings us face to face with our own darker impulses and deep-seated traumas.”
— Chicago Review of Books

Avni Doshi was born in New Jersey. She received her BA in art history from Barnard College and her MA in history of art at University College, London. While working as an art writer and curator in India, Doshi began writing fiction. She has been awarded the Tibor Jones South Asia Prize and a Charles Pick Fellowship. Her debut novel, Burnt Sugar, was shortlisted for the prestigious TATA Literature Award upon its publication in India and has now been shortlisted for the Booker Prize. Avni Doshi currently lives in Dubai with her family.