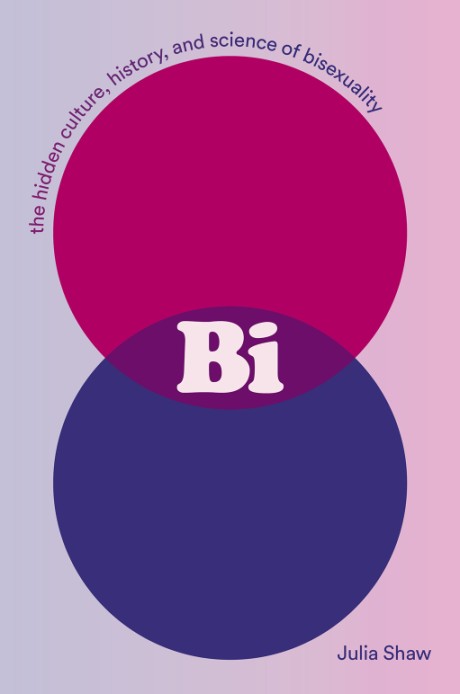 The Hidden Culture, History, and Science of Bisexuality

A provocative, eye-opening, and original book on the science of sexuality beyond gender from an internationally bestselling pop-psychologist

Despite all the welcome changes that have happened in our culture and laws over the past few decades in regards to sexuality, the subject remains one of the most influential but least understood aspects of our lives. For psychologist and bestselling author Julia Shaw, this is both professional and personal—Shaw studies the science of sexuality and she herself is proudly and vocally bisexual.

It’s an admission, she writes, that usually causes people’s pupils to dilate, their cheeks to flush, and their questions to start flowing. Ask people to name famous bisexual actors, politicians, writers, or scientists, and they draw a blank. Despite statistics that show bisexuality is more common than homosexuality, bisexuality is often invisible.

In BI: The Hidden Culture, History, and Science of Bisexuality, Shaw probes the science and culture of attraction beyond the binary. From the invention of heterosexuality to the history of the Kinsey scale, as well as asylum seekers trying to defend their bisexuality in a court of law, there is so much more to explore than most have ever realized. Drawing on her own original research—and her own experiences—this is a personal and scientific manifesto; it’s an exploration of the complexities of the human sexual experience and a declaration of love and respect for the nonconformists among us.

“An accessible, often insightful consideration of a misunderstood sexual identity...The largely informal and always lively style of Shaw’s writing helps make her case. She is persuasive in her insistence that bisexuality is an important and overlooked dimension of the human story.”
Kirkus Reviews —

“Her writing remains colloquial and engaging...Forthright and empowering, this is a call for understanding and supporting bisexuality.”
Booklist —

“This book beautifully illustrates the common and quiet struggles that many bisexuals experience… Julia draws on her own experiences to deliver an honest look at the hidden culture of bisexuality in this extremely important book.”

"With wit and humour Shaw introduces the milestones and celebrities of bi history . . . We can all be grateful to her for her skillful and sympathetic presentation of her discoveries."
New York Journal of Books —

“Bi is a lively roller-coaster ride through all things bisexual. Full of fascinating facts, up-to-date stats, pop culture references, and thoughtful analysis, the book covers everything from bisexual animals to political scandals, from exclusions in queer spaces to threesomes. Julia writes eloquently and engagingly, sharing moments from her own journey along the way. A must-have for every queer bookcase.”
Meg-John Barker, author of Queer: A Graphic History —

“It’s fabulous, amazing, brilliantly done, and so important. Julia Shaw has written the bi bible. The hidden history and public face of millions of people. Fun, moving, and skillful all at once.”
Professor Andrew Reynolds, founder of Queer Politics at Princeton University —

“Endlessly illuminating, challenging and compelling. Bi is a vivid and vital read.”

“An incredible resource for anyone wishing to learn more about bisexuality. Whether you're a beginner or expert, this book is certain to teach you something new...This is a fascinating read.”
Shiri Eisner, author of Bi: Notes for a Bisexual Revolution —

"The book opens up conversations that might just lead to more visibility, understanding and empathy for all people, however they define themselves. If those conversations could become the latest big thing, we’d all benefit."

“Well-researched, cogent and compelling…Shaw is always an engaging guide.”
the Independent (UK) —

Dr. Julia Shaw is a criminal psychologist at University College London, and part of Queer Politics at Princeton University which works for LGBT+ equality, democracy, and civil rights. She is actively involved in bisexual research, and is the founder of the international Bisexual Research Group. Dr. Shaw also has a hit BBC podcast, Bad People, where together with her co-host she uses research to examine some of society’s most pressing issues. She is the author of Evil, which was a bestseller in Canada and Germany, and The Memory Illusion, which was published in 20 languages. She lives in London.