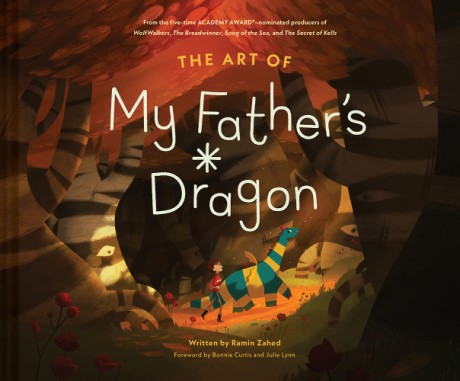 The Art of My Father's Dragon

The Art of My Father’s Dragon documents the production of five-time Academy Award–nominated animation studio Cartoon Saloon’s (The Secret of Kells, Song of the Sea, The Breadwinner, WolfWalkers) and Mockingbird Pictures’ upcoming Netflix exclusive fantasy feature. Inspired by Ruth Stiles Gannett’s timeless children’s classic, My Father’s Dragon tells the story of Elmer—a young boy struggling to cope after a move to the city with his mother—who runs away in search of Wild Island, and a young dragon who waits to be rescued.

Through exclusive commentary and interviews with Oscar-nominated director Nora Twomey (The Breadwinner), executive producers Tomm Moore and Meg LeFauve, and the world-renowned artists and crew of Cartoon Saloon, animation fans will discover the process behind bringing the ferocious beasts and mysterious locations of Elmer’s journey to life in beautiful 2-D animation. Alongside never-before-seen production art and sketches, author and acclaimed animation journalist Ramin Zahed breaks down the process of translating the story from page to screen and introduces readers to the fantastical characters of Wild Island.

Ramin Zahed is a Los Angeles–based author, animation journalist, and editor in chief of Animation Magazine. His books include The Art of The Mitchells vs. The Machines, Spider-Man: Into the Spider-Verse: The Art of the Movie, and The Art of Love, Death + Robots. Bonnie Curtis and Julie Lynn’s Mockingbird Pictures productions include award-winning festival favorites Albert Nobbs, 5 to 7, and To The Bone—as well as studio fare including Life, Terminator: Dark Fate, and the upcoming Heart of Stone. Before joining Mockingbird, Ms. Curtis worked for fifteen years with Steven Spielberg on movies including Schindler’s List, Saving Private Ryan, and Minority Report. Prior to Ms. Curtis joining the company, Ms. Lynn produced independent films under the Mockingbird banner including Nine Lives, Mother and Child, and The Jane Austen Book Club. My Father’s Dragon is Mockingbird’s first feature in animation.