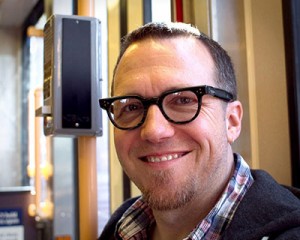 Brian Biggs was born in Arkansas, moved to Texas, then moved to New York City to attend Parsons School of Design. He has also lived in Paris and San Francisco. He has worked as an art director and graphic designer, animator for interactivity and multimedia projects, teacher, writer, and illustrator. He has written and drawn comics and graphic novels, designed publications, and illustrated for many magazines and newspapers. He illustrates children’s books, including the New York Times bestselling Frank Einstein middle-grade series by Jon Scieszka, for magazines, newspapers, and advertising; posters, toys, and puzzles. He also works with animation, music, and various other media. His preschool series, Tinyville Town, will be published in summer 2016. He lives in Philadelphia, Pennsylvania.