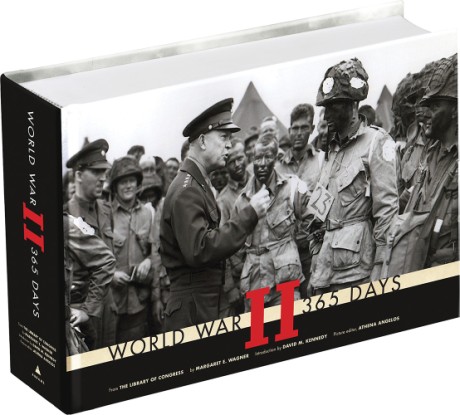 Drawn from the vast collections of the Library of Congress, World War II 365 Days is a unique compilation of riveting text and more than 500 images, many in color, that reveals the drama and complexity of the greatest war in human history.

Photographs, lithographs, political cartoons, maps, on-the-scene combat art, and other visual materials from all the major combatants, including much material rarely seen, combine to tell the interlocking stories of people caught in this epic conflict that raged across all the world's oceans and in countries from Norway to North Africa, Britain to Burma. Quotes from letters, diaries, speeches, and memoirs are included in the text and help capture the drama and scale of the war: the carnage and desperate bravery on battlefields from Normandy to Iwo Jima, the epic air and sea battles, the unparalleled brutality of the major Axis nations, the home-front sacrifices made by people in all walks of life and in all combatant countries and the miracle of mobilization that made the United States the "arsenal of democracy."

The book is organized into twelve chronological and thematic chapters that extend from prewar events that led to the conflict, through a year-by-year examination of the war itself, and into its aftermath. A timeline running throughout the book highlights pivotal events.

World War II 365 Days is much more than a gallery of major figures and events: it is a vivid mosaic of the battlefield and home front experiences of the "ordinary" people who endured years of destruction and rending uncertainty.

Margaret E. Wagner is the author of The American Civil War: 365 Days and coauthor of The Library of Congress World War II Companion. She is a senior editor and writer in the Publishing Office of the Library of Congress. David M. Kennedy is the Donald J. MacLachlan Professor of History at Stanford University. His book Freedom from Fear: The American People in Depression and War, 1929-1945 was awarded the Pulitzer Prize in 2000.