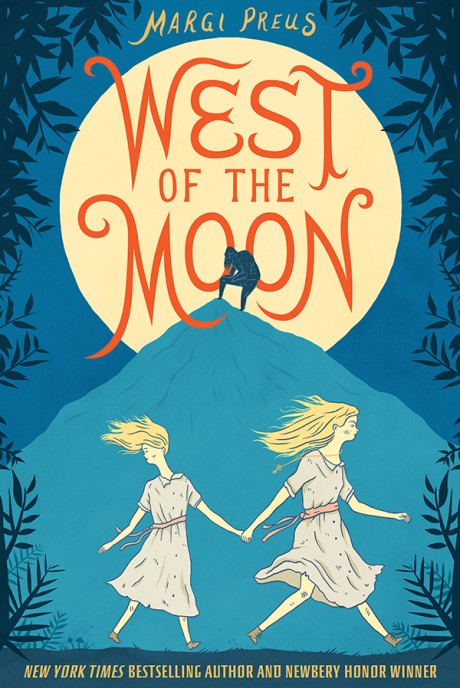 West of the Moon

In West of the Moon, award-winning and New York Times bestselling author Margi Preus expertly weaves original fiction with myth and folktale to tell the story of Astri, a young Norwegian girl desperate to join her father in America.
After being separated from her sister and sold to a cruel goat farmer, Astri makes a daring escape. She quickly retrieves her little sister, and, armed with a troll treasure, a book of spells and curses, and a possibly magic hairbrush, they set off for America. With a mysterious companion in tow and the malevolent “goatman” in pursuit, the girls head over the Norwegian mountains, through field and forest, and in and out of folktales and dreams as they steadily make their way east of the sun and west of the moon.

Praise for West of the Moon
FIVE STARRED REVIEWS
"Like dun silk shot thought with gold, Preus interweaves the mesmerizing tale of Astri’s treacherous and harrowing mid-nineteenth-century emigration to America with bewitching tales of magic. A fascinating author’s note only adds to the wonder."
--Booklist, starred review

"Enthralling and unflinching, this historical tale resonates with mythical undertones that will linger with readers after the final page is turned."
--School Library Journal, starred review

"Astri is like a girl out of a fairy tale, and the native folktales that Preus weaves through the narrative serve as guides, lessons, and inspiration for her."
--Publishers Weekly, starred review

"Several Norwegian folktales are seamlessly integrated into the fast-paced, lyrically narrated story, which features a protagonist as stalwart and fearless as any fairy-tale hero."
--The Horn Book Magazine, starred review

"It’s Astri’s voice, however, that is most appealing: her direct, no-nonsense narration has a sharp bite, yet it also reveals the vulnerable young girl who’s willing to continue to fight but is nonetheless exhausted by the weight of her struggle. The chapters have an episodic structure that makes this an ideal choice for readaloud or storytelling adaptations, while the mix of folklore, fact, and fantasy will please fans of Edith Patou’s East."
--The Bulletin of The Center for Children’s Books

Margi Preus has written many popular plays, picture books, and novels for young readers. She has traveled the globe to research her novels and, along the way, has made friends in Japan, Norway, and many other places. She lives in Duluth, Minnesota. Visit her online at margipreus.com.