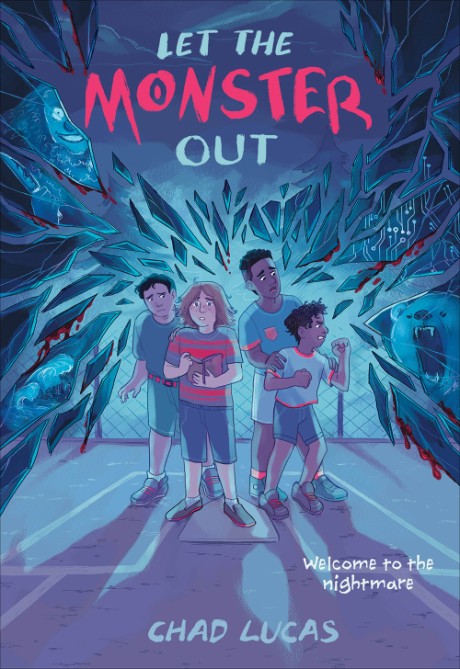 Let the Monster Out

An equal parts heart-pounding and heartfelt middle-grade mystery about facing––and accepting––your fears, perfect for fans of Stranger Things and The Parker Inheritance

Bones Malone feels like he can’t do anything right in his new small town: He almost punched the son of the woman who babysits him and his brothers, he’s one of the only Black kids in Langille, and now his baseball team (the one place where he really feels like he shines) just lost their first game. To make matters worse, things in town are getting weird. His mom isn’t acting like herself at all—she’s totally spaced out, almost like a zombie. And then he and his brothers have the same dream—one where they’re running from some of their deepest fears, like a bear and an eerie cracked mirror that Bones would rather soon forget.

Kyle Specks feels like he can never say the right thing at the right time. He thinks he might be neurodivergent, but he hasn’t gotten an official diagnosis yet. His parents worry that the world might be too hard for him and try to protect him, but Kyle knows they can’t do that forever. Even though he’s scared, he can’t just stand by and do nothing while things in this town get stranger and stranger, especially not after he and Bones find a mysterious scientist’s journal that might hold answers about what’s going on.

But when faced with seemingly impossible situations, a shady corporation, and their own worst nightmares, will Kyle and Bones be brave enough to admit they're scared? Or will the fear totally consume and control them?

"Through thoughtful and gripping omniscient narration, the author seamlessly weaves in clue after clue, leaving readers eager to reach this mystery’s heart-pounding end. . .A thrilling journey about acceptance and facing your deepest fears."
Kirkus Reviews —

"Lucas crafts an enjoyable science fiction mystery with characters who travel into different dream dimensions based on their greatest fears. . .Perfect for fans of Stranger Things."
School Library Journal —

Author Chad Lucas talks about the inspiration for the book

Chad Lucas has been in love with words since he attempted his first novel on a typewriter in the sixth grade. He has worked as a newspaper reporter, communications advisor, freelance writer, part-time journalism instructor, and parenting columnist. A proud descendant of the historic African Nova Scotian community of Lucasville, he lives with his family near Halifax, Nova Scotia. He enjoys coaching basketball and is rarely far from a cup of tea.