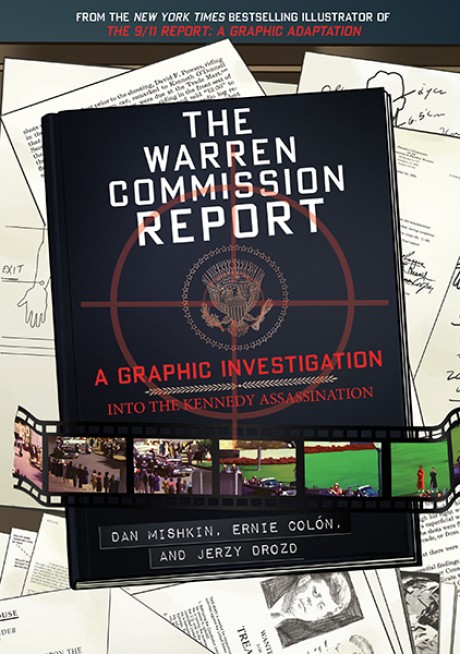 Within days of the murder of President John F. Kennedy, Lyndon B. Johnson appointed a seven-member commission to investigate the assassination. In its report, the Warren Commission determined that there was “no credible evidence” conflicting with its conclusion of a lone gunman. Artist Ernie Colón, bestselling illustrator of The 9/11 Report: A Graphic Adaptation, teams up with author Dan Mishkin to provide a unique means of testing the commission’s findings, unraveling conflicting narratives side by side through graphic-novel techniques. The Warren Commission Report: A Graphic Investigation into the Kennedy Assassination breaks down how decisions in the days that followed the assassination not only shaped how the commission reconstructed events but also helped foster the conspiracy theories that play a part in American politics to this day.

“This dramatization of the murder mystery of the century integrates numerous narratives to make an excellent starting point for anyone interested in this American tragedy.”
— Library Journal

“The Warren Commission Report, like its namesake, stands out for its close attention to politics and to the grisly details that supported various theories. . . . The authors’ hope is that a confusing day from the past becomes more accessible.”
— The Atlantic

“The Warren Commission Report: A Graphic Investigation into the Kennedy Assassination from Abrams ComicArts doesn’t attempt to do what the Commission failed to do. Rather, Mishkin, Colón, and Drozd take the report’s findings and examine them in light of the evidence—what information was not included because it didn’t fit the narrative, what controversies hold water and which ones don’t, and why did the Commission choose the tack it did. And ultimately, how did the Warren Commission’s failings affect, overtly or subtly, the changing face of America in the 1960s.”
— Comic Book Resources

“Everything you wanted to know about the investigation into the assassination of President John F. Kennedy in an easy-to-follow illustrated format.”
— Cleveland Plain Dealer

Dan Mishkin has more than 30 years of experience in comics, including the Amethyst series created with Ernie Colón. He lives in Lansing, Michigan. Ernie Colón has created comics for more than five decades and has worked at Harvey, Marvel, and DC Comics. He lives in Huntington, New York. Jerzy Drozd teaches comics workshops in universities and schools, in addition to illustrating. He lives in Ann Arbor, Michigan.