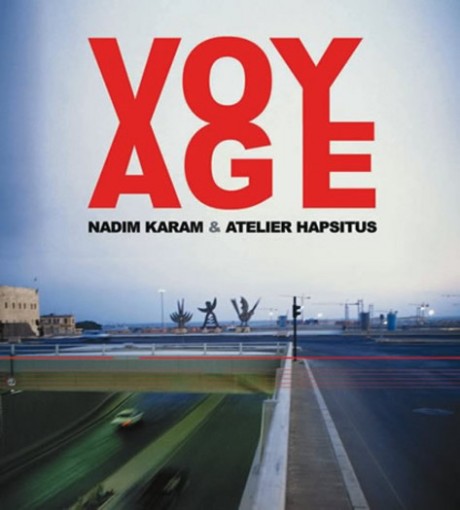 On the Edge of Art, Architecture and the City

By Nadim Karam, and Atelier Hapsitus

oyage is an exploration of the work of Nadim Karam and Atelier Hapsitus from the late eighties to the present. Blurring the edges between art, architecture and urbanism, they have created art installations for places as varied as Beirut museum squares, Prague bridges, the gardens of a temple in Nara [Japan], and a simultaneous London/Dublin urban installation. Voyage is about transporting fantasy into the urban arena and making it reality. On one level, it shows how giant urban sculptures, story-telling architecture and an ideological approach to urbanism all emphasize the need for dreams in the city. On another level, the book introduces the Age of Voy, a quixotic fictional journey accompanied by the Archaic Procession, an infinite line of shadow creatures traversing time and space which manifest themselves in the form of stories, paintings and sculptures. Via their stories we are taken forward into the new millennium. • Includes contributions from prominent architects, artists and critics such as Hiroshi Hara and Pierre Restany • International press coverage in A+U, AD, Domus and Blueprint • Parallel to this publication is a website to include games on the theme of the archaic procession for children; and the book Voyage on line.

Nadim Karam received a PhD in architecture from the University of Tokyo in 1989. Two years later he founded Atelier Hapsitus, and has become known for his unique urban projects. He lectures worldwide.