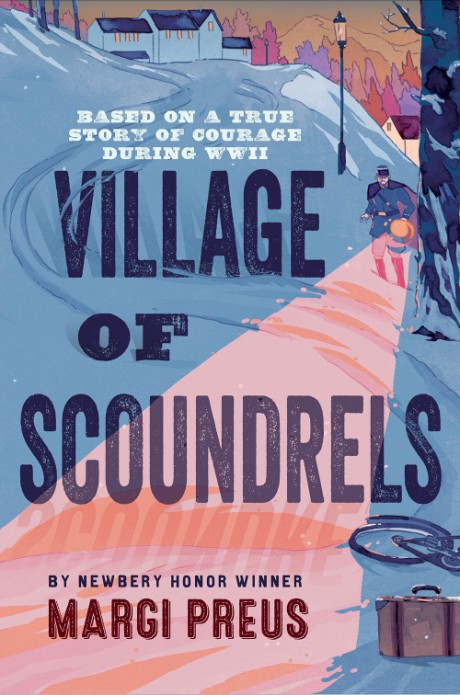 Based on the true story of the French villagers in WWII who saved thousands of Jews, this novel tells how a group of young teenagers stood up for what is right. Among them is a young Jewish boy who learns to forge documents to save his mother and later goes on to save hundreds of lives with his forgery skills. There is also a girl who overcomes her fear to carry messages for the Resistance. And a boy who smuggles people into Switzerland. But there is always the threat that they will be caught: A policeman is sent to keep an eye on them, German soldiers reside in a local hotel, and eventually the Gestapo arrives, armed with guns and a list of names. As the knot tightens, the young people must race against time to bring their friends to safety.

**STARRED REVIEW**
"Each character's backstory is woven seamlessly into the action. Preus builds suspense and drama by following these brave souls as they take on dangerous tasks... Deeply emotional, intense, and thought-provoking."
Kirkus Reviews —

"Fascinating. . .  Readers inspired by communities making a difference—and in WWII and Holocaust history—will find much of interest here."
Booklist —

**STARRED REVIEW**
"Preus conveys the tales of heroism and resistance of the village teens with a story that is filled with suspense and intrigue...  Readers will be inspired by these teens that stood for what is right and who, through their actions, saved the lives."
School Library Connection —

**STARRED REVIEW**
"Preus weaves the teens’ backstories and individual dreams into the mounting dangers each faces and poignantly renders the quietly courageous and supportive community... An inspiring narrative founded on a real-life community and individuals."
Publishers Weekly —

**STARRED REVIEW**
"Both thrilling and chilling, Village of Scoundrels will surely keep readers engrossed from start to finish."
Shelf Awareness —

"Preus crafts a delicate balance of the characters’ interweaving tales and the community that bands together to protect its vulnerable population."
Bulletin of the Center for Children's Books —

Village of Scoundrels Discussion Guide by Abrams Books on Scribd

Margi Preus is the author of West of the Moon, Shadow on the Mountain, and Heart of a Samurai, which was a Newbery Honor book. She also writes for a variety of theater companies. She lives in Duluth, Minnesota.