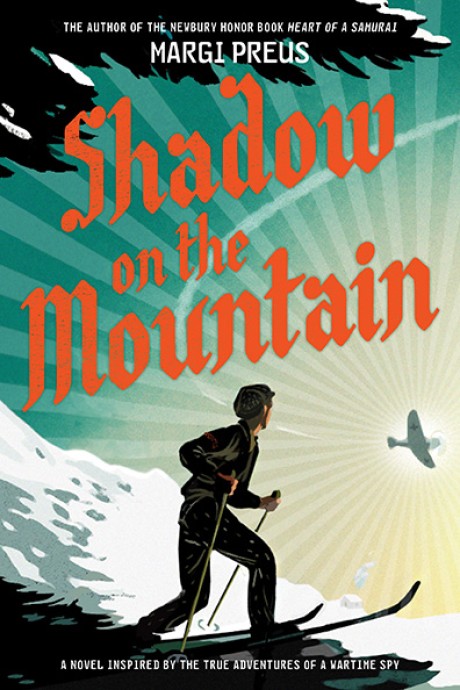 Shadow on the Mountain

Shadow on the Mountain recounts the adventures of a 14-year-old Norwegian boy named Espen during World War II. After Nazi Germany invades and occupies Norway, Espen and his friends are swept up in the Norwegian resistance movement. Espen gets his start by delivering illegal newspapers, then graduates to the role of courier and finally becomes a spy, dodging the Gestapo along the way. During five years under the Nazi regime, he gains—and loses—friends, falls in love, and makes one small mistake that threatens to catch up with him as he sets out to escape on skis over the mountains to Sweden.
Preus incorporates archival photographs, maps, and other images to tell this story based on the real-life adventures of Norwegian Erling Storrusten, whom Preus interviewed in Norway.

Praise for Shadow on the Mountain
STARRED REVIEWS
"Newbery Honor winner Preus infuses the story with the good-natured humor of a largely unified, peace-loving people trying to keep their sanity in a world gone awry. Based on a true story, the narrative is woven with lively enough daily historical detail to inspire older middle-grade readers to want to learn more about the Resistance movement and imitate Espen's adventures."
—Kirkus Reviews, starred review

"This engrossing offering sheds light on the Norwegians' courage during World War II. Preus masterfully weds a story of friendship with the complications faced by 14-year-old Espen and his friends as Nazi restrictions and atrocities become part of their everyday lives...This is at once a spy thriller, a coming-of-age story, and a chronicle of escalating bravery. Multidimensional characters fill this gripping tale that keeps readers riveted to the end."
—School Library Journal, starred review

"A closely researched historical novel... relates this wartime tale with intelligence and humor...Ms. Preus deftly uses together historical fact (Espen is based on a real-life spy) and elements of Norwegian culture to conjure a time and place not so terribly long ago."
—The Wall Street Journal

"Margi Preus, who won a Newbery honor for Heart of a Samurai, returns with another riveting work of historical fiction... This fine novel, which includes an author's note, a timeline, a bibliography and even a recipe for invisible ink, is based on extensive research... The result is an authentic coming-of-age story, perfect for readers fascinated by the diary of Anne Frank or Lois Lowry's classic, Number the Stars."
—BookPage

"The final chapters, which chronicle Espen's dramatic escape to Sweden—days and nights of mountain skiing, Nazis in hot pursuit—take the book into adventure-thriller territory without losing the humanity that characterizes Preus's account."
—The Horn Book Magazine

"Preus makes crystal clear the life imperiling risks that Espen undertakes and the danger to his family."
—The Bulletin of the Center for Children's Books

"As readers understand the risks that Espen took, they will want to learn more about this period. That Espen escaped to Sweden by traveling at night on skis with five different guides should intrigue them."
—Library Media Connection

Margi Preus is an acclaimed children’s book author and playwright whose first novel, Heart of a Samurai, earned a 2011 Newbery Honor award. She lives in Duluth, Minnesota. Visit her online at www.margipreus.com.