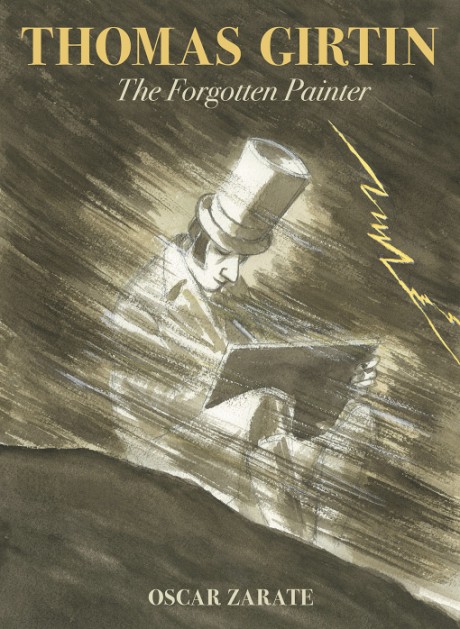 Part historical narrative, part modern fiction, this book consists of two interlinked stories: The first focuses on the 18th-century painter Thomas Girtin and his relationship with his friend and rival J.M.W. Turner; the second tells the tale of three amateur artists in the present day, united by a shared interest in Girtin’s art. Using this dual narrative to draw parallels between two eras of rapid technological advancement and sociopolitical turbulence, Oscar Zárate’s long-awaited new graphic novel restores to modern eyes this unjustly forgotten figure, whose work has been almost entirely ignored despite his huge influence in British painting. At the time of death, aged just 27, Girtin had already established himself as a pioneer and a master: His expressionist approach was a significant turning point in the British watercolor tradition. But the brevity of his career, coupled with his chosen medium (compared to oils, watercolors were a humbler and less easily exhibited form) meant that his work came to be overshadowed by that of Turner. As Turner himself famously remarked, “If Tom had lived, I should have starved.

Oscar Zárate is an award-winning graphic novelist. His books include collaborations with Alan Moore (A Small Killing) and Alexei Sayle (Geoffrey the Tube Train and the Fat Comedian). He was the editor of It's Dark in London, and he wrote and illustrated The Park. He collaborated with Richard Appignanesi on Dr Faustus, Hysteria, Introducing Freud and Introducing Existentialism. Born in Argentina, it was over 40 years ago that Zárate decided to visit London, where he has lived and worked ever since.