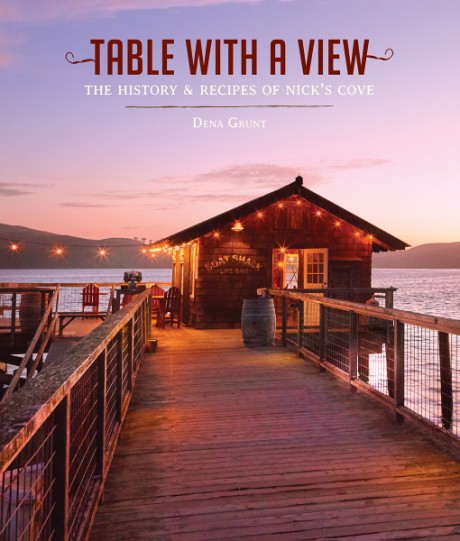 Table with a View

The History and Recipes of Nick's Cove

Nick’s Cove, perched alongside beautiful Tomales Bay, opened its doors in the 1930s and has been a Northern California destination ever since. Table with a View: The History and Recipes of Nick’s Cove celebrates the historic restaurant, bar, and inn’s award-winning cuisine, which features fresh seafood, locally sourced meats, and seasonal produce from their on-site farm and garden, the Croft. Inspired by the area’s serene natural beauty and abundant resources, the restaurant’s dishes reflect the perfect combination of comfort and refinement, embracing an elegant approach to hearty farm-to-table cuisine. From new takes on classics such as Oysters Nickerfeller and Crab Benedict to hearty fare like Dungeness Crab Mac and Cheese and Seared Duck with Blackberry Sauce, Table with a View is much more than a cookbook—it’s a celebration of a cultural heritage in a region shaped largely by its culinary bounty.

...quietly wonderful, capturing the history of the bayfront property, the bounty of the surrounding fishing waters and rolling farms, and bringing the experience into home kitchens with achievable recipes for novice cooks.
Eater SF —

Dena Grunt is president of Highway 1 Hospitality and oversees all aspects of operations at the company’s Northern California businesses. She lives in Petaluma, California, with her husband and son. Frankie Frankeny is a San Francisco–based food and lifestyle photographer whose work has been featured in over 70 cookbooks.