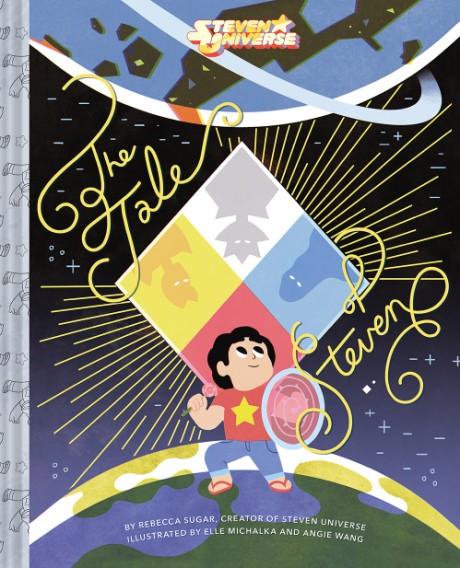 Steven Universe: The Tale of Steven

The official picture-book adaptation of “Change Your Mind” by series creator Rebecca Sugar!

A companion book to the series, The Tale of Steven tells the story of “Change Your Mind” in the same style as the New York Times bestselling The Answer.

Featuring an unusual and thought-provoking interactive format, readers will follow the story of Pink Diamond’s escape from Homeworld, Rose Quartz’s life on Earth, and the creation of Steven Universe, from multiple conflicting perspectives.

The Tale of Steven will be an irresistible keepsake for Steven Universe fans of all ages.

From the back cover:

Once upon a time,

ran away from her Homeworld

to the planet Earth.


She transformed into Rose Quartz

and gave up her existence

to create a half-human child,


But so long as Steven has her Gem,

can they BOTH exist?

Is she trapped inside his Gem?


This is so DISORIENTING!


In a story unlike any other—

made up of multiple points of view—

who gets to tell the Tale of Steven?

“The Tale of Steven is a storybook unlike any other, in an interactive format that tells the same story from multiple viewpoints, inviting the reader to interact with the story as they wish.”
The Hollywood Reporter —

“…beneath the surface Tale of Steven is a wonderfully smart commentary on bias and perspective, and how different points of view can all color and reframe the same story...”
Gizmodo —

“Challenging in all the right ways, heartstring-tugging and entertaining…”
Animation Magazine —

Rebecca Sugar is a New York Times bestselling author and the creator of the Emmy Award-winning show Steven Universe on Cartoon Network. She previously worked as a writer and storyboard artist on Cartoon Network's animated series Adventure Time. She's an artist, songwriter, and director.

Elle Michalka
is an Annie-nominated art director and New York Times bestselling illustrator who has worked for shows including Steven Universe, Gravity Falls, and Midnight Gospel. She is a native Texan and CalArts alum who currently lives and works in Los Angeles.

Angie Wang is an illustrator and cartoonist based in Los Angeles. She works as a prop/FX designer on Steven Universe and is one of the four co-founders of the annual comics festival Comic Arts Los Angeles.