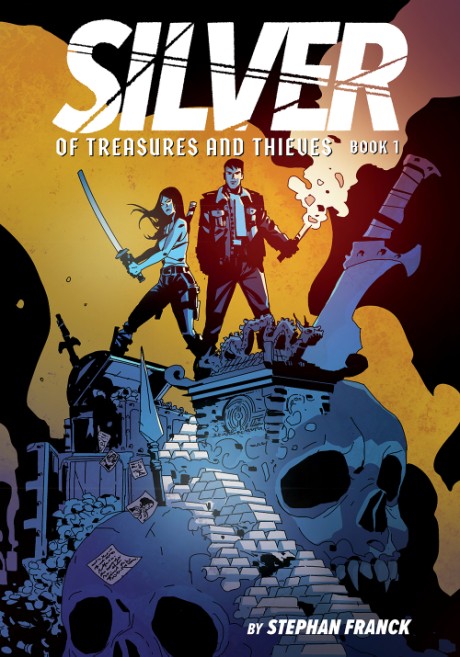 "Silver is so big, bold and juicy! I absolutely love this book!” —Bill Sienkiewicz, Eisner Award–winning artist of Moon Knight and Elektra: Assassin

“There may not be a better original vampire comic book in America than Silver.” —ComicBookBin

There are only two kinds of objects in this world. The ones that shine and the ones that don’t.

James Finnegan, master thief, only concerns himself with objects from the first category. Those objects don’t hide in plain sight. They hide in dark places.

When Finnigan loses his grifter gang’s entire fortune in a job gone wrong, he’s desperate to make amends. He stumbles on his chance to do so in the crypt of the Harker Foundation, where he finds a bar of pure silver and a notebook that tells of the Silver Dragon, an ancient, immeasurable treasure beyond imagination. It’s a tall tale, but also Finnigan’s only lead. To make up for what he’s lost, he formulates the heist of the millennium in search of the Silver Dragon. There’s just one catch: the famed treasure is said to be hidden in a castle full of vampires.

Set in the noir-pulp era of the 1930s in a world where Bram Stoker’s Dracula is more fact than fiction, Silver is a genre-bending, rip-roaring romp that’s equal parts gothic horror and pure adventure. With its ensemble cast of misfits, beautifully sharp art, and whip-smart humor, Stephan Franck has struck gold in the first of this critically acclaimed duology.

Stephan Franck is an award-nominated animator/writer/director/comic book creator, who supervised the animation of MARVEL STUDIO’s ”WHAT IF…?” season 1, and is currently directing new episodes of the series. He was a supervising animator on the cult classic THE IRON GIANT, and contributed story to DESPICABLE ME. He co-created the animated TV series CORNEIL & BERNIE (Nicktoons - Hub Network), received an Annie Award nomination for Best Director In a TV Program for the featurette SMURFS: THE LEGEND OF SMURFY HOLLOW.  Equally active in comics, Stephan founded the comic-book publishing company DARK PLANET. His graphic novel debut SILVER earned a nomination for the prestigious Russ Manning Award at San Diego Comic Con’s Eisner Awards, and it is now published by Abrams ComicArts.