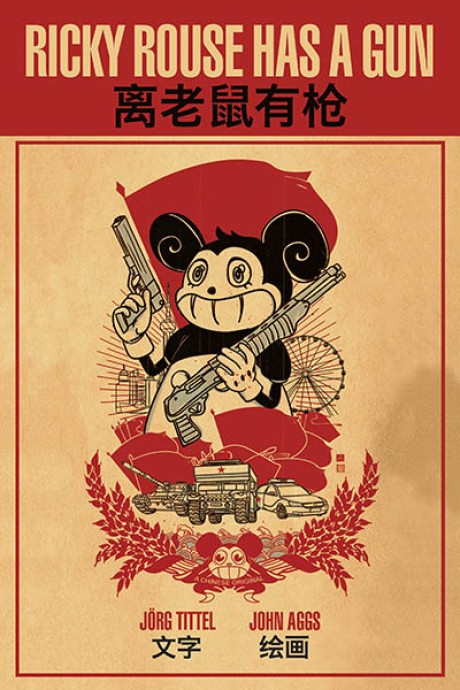 Ricky Rouse Has a Gun

Rick Rouse is a US Army deserter who, after running away to China, gets a job at Fengxian Amusement Park—a family destination heavily “inspired” by Western culture, featuring Rambi (the deer with a red headband), Ratman (the caped crusader with a rat’s tail), Bumbo (small ears and a big behind), and dozens of other original characters. The park’s general manager is convinced that Rick was destined to greet Fengxian customers, dressed as none other than Ricky Rouse. This original graphic novel is a relentless action comedy, a satire of US–China relations, a parody of Western entertainment, and a curious look at China—a country that, once we look past its often outrageous copyright infringements, is a culture ripe with innovation and a unique, courageous spirit.

“I loved Ricky Rouse Has a Gun, a comic filled with deaths and yet full of life.”
Alejandro Jodorowsky —

Jörg Tittel writes, produces, and directs plays, films, and video games. His passion and long-term mission is to create beautifully crafted stories and character-driven projects that transcend media. He lives in London. John Aggs is a comic-book artist whose work for adults and for children has been published by the Guardian, Random House, Hachette, and many others. He lives in London.