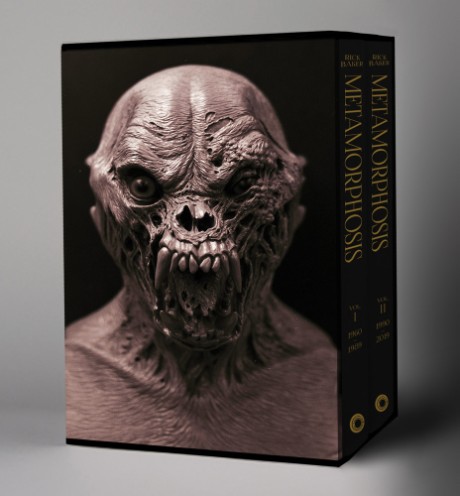 Rick Baker: Metamorphosis chronicles the career of the legendary special effects and makeup artist, best known for his creature effects and designs. This deluxe, two-volume set, replete with more than 1,600 four-color images and original sketches, covers the makeup artist’s forty-plus-year journey, from his early days as a young “monster maker,” creating body parts in his parents’ kitchen, to his more than seventy film and television credits, which resulted in seven Academy Awards, one Emmy, and three BAFTAs, among numerous others.
From the gory zombies of Michael Jackson’s Thriller and the staggeringly lifelike Bigfoot in Harry and the Hendersons to the creative builds in Men in Black and the groundbreaking effects in An American Werewolf in London, Rick Baker’s special effects, makeup, and prosthetics count among some of Hollywood’s most enduring legacies.

"Rick Baker has had a remarkable career...(which) is now tracked, and celebrated, in the J.W. Rinzler-written, two-volume Metamorphosis, which includes 1,600 color images and original sketches as well as an introduction by its subject, a foreword by John Landis, a preface by Peter Jackson, and an afterword by Baker’s mentor, the late Dick Smith."
Entertainment Weekly —

“The more than 1,600 images and original sketches illustrate Baker’s career, from the gory zombies of Michael Jackson’s Thriller and lifelike Bigfoot in Harry and the Hendersons to the creative builds in Men in Black.”
Publisher’s Weekly —

“Rick Baker: Metamorphosis is an elaborate, full-color, two-volume, 700-page extravaganza highlight his 40+ year journey through Hollywood. Frank and I were lucky enough to get a couple of copies, and our jaws are still hanging open.”
Gilbert Gottfried's Amazing Colossal Podcast, Gilbert Gottfried —

"Not for the faint of heart, this two-volume retrospective of the Oscar-winning special makeup effects artist revisits his spookiest creations."
The New York Times —

John Landis is an American film director, screenwriter, actor, and producer best known for directing National Lampoon’s Animal House, The Blues Brothers, An American Werewolf in London, and Coming to America, among other films. He also directed Michael Jackson’s music videos for “Thriller” and “Black or White”.

Peter Jackson is a New Zealand film director, screenwriter, and film producer best known as the director, writer, and producer of the Lord of the Rings trilogy and the Hobbit trilogy among others.

Dick Smith, an American Academy Award–winning special makeup effects artist, nicknamed the “Godfather of Make- up,” was known for his groundbreaking work on such films as Little Big Man, The Godfather, The Exorcist, and Taxi Driver.