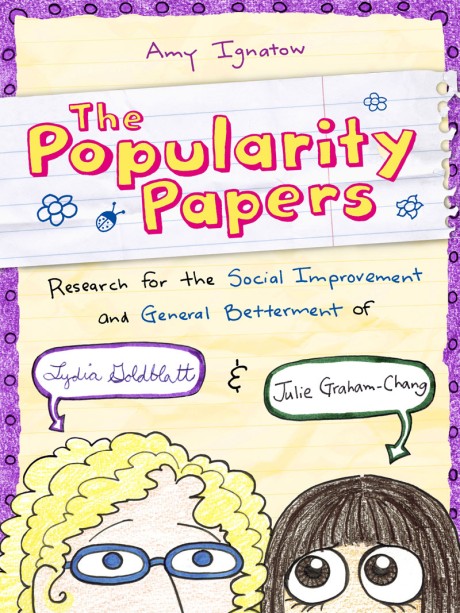 Lydia Goldblatt and Julie Graham-Chang are best friends with one goal: to crack the code of popularity. Lydia’s the bold one: aspiring theater star, stick-fighting enthusiast, human guinea pig. Julie’s the shy one: observer and artist, accidental field hockey star, faithful recorder. In this notebook they write down their observations and carry out experiments to try to determine what makes the popular girls tick. But somehow, when Lydia and Julie try to imitate the popular girls, their efforts don’t translate into instant popularity. Lydia ends up with a bald spot, their parents won’t stop yelling, and Julie finds herself the number-one crush of Roland Asbjørnsen. Worse, they seem to be drifting farther and farther from their goal—and each other.

Amy Ignatow’s hilarious debut novel introduces the intrepid fifth-graders Julie and Lydia, whose quest to understand popularity may not succeed in the ways they want, but will succeed in keeping readers in stitches.

From Bulletin of the Center for Children's Books:

Lydia and Julie, BFFs since birth, are now preparing to enter junior high, and they're on a mission to become popular. First, however, they have to determine exactly how popularity is achieved, so they decide to approach the matter as any good scientist would: observe those creatures already at the height of popularity and apply said observations to themselves, in the hopes of cracking into that mysterious world of junior-high stardom. The two record their observations and the often spectacularly unsuccessful outcomes of their various social experiments in a scrapbook-like journal, complete with notes passed at school, lists of projected popularity goals, and credibly goofy and kidlike drawings. The story here is fairly familiar: the girls fail miserably at their first attempts at the A-list (Lydia's hair falls out after a botched dye job, among other disasters) but eventually find acceptance in the upper echelon, only to learn the valuable lesson that it's the people you're most comfortable around who make the best friends. The diary format, however, adds an extra dimension of funny, and as in Jeff Kinney's Wimpy Kid series about Greg Heffley, it allows Julie and Lydia to come alive through their witty dialogue, their perceptive commentary, and even their characteristic handwriting. Secondary characters shine as well, particularly Julie's embarrassing but ultimately charming two dads, along with Lydia's goth-punk sister, a font of random quips and junior high wisdom. The popular kids end up being far from perfect and each has issues of her own to contend with, making the actual friendships that form among the girls all the more endearing. Those waiting for the next installment of Greg Heffley's adventures will be well served by this amusing experiment in sixth-grade celebrity. KQG