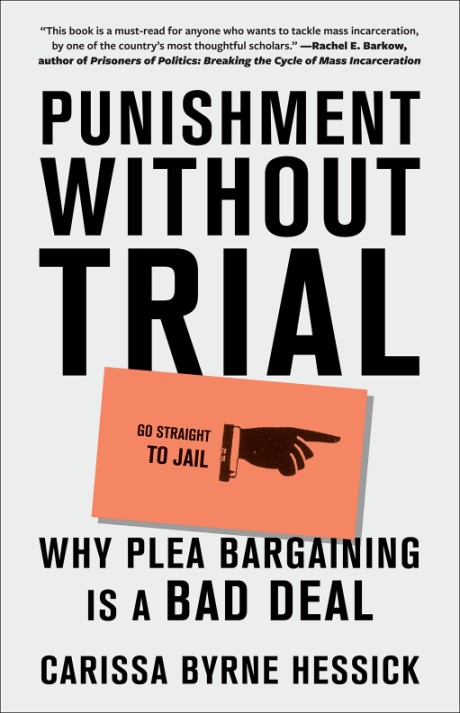 Why Plea Bargaining Is a Bad Deal

"This book is a must-read for anyone who wants to tackle mass incarceration, by one of the country's most thoughtful scholars." --Rachel E. Barkow, author of Prisoners of Politics: Breaking the Cycle of Mass Incarceration

When Americans think of the criminal justice system, the image that comes to mind is a trial-a standard court­room scene with a defendant, attorneys, a judge, and most important, a jury. It's a fair assumption. The right to a trial by jury is enshrined in both the body of the U.S. Constitution and the Bill of Rights. It's supposed to be the foundation that undergirds our entire justice system.
But in Punishment Without Trial: Why Plea Bargaining Is a Bad Deal, University of North Carolina law professor Carissa Byrne Hessick shows that the popular conception of a jury trial couldn't be further from reality. That bed­rock constitutional right has all but disappeared thanks to the unstoppable march of plea bargaining, which began to take hold during Prohibition and has skyrocketed since 1971, when it was affirmed as constitutional by the Supreme Court.

Nearly every aspect of our criminal justice system encourages defendants-whether they're innocent or guilty-to take a plea deal. Punishment Without Trial showcases how plea bargaining has undermined justice at every turn and across socioeconomic and racial divides. It forces the hand of lawyers, judges, and defendants, turning our legal system into a ruthlessly efficient mass incarceration machine that is dogging our jails and pun­ishing citizens because it's the path of least resistance. Professor Hessick makes the case against plea bargaining as she illustrates how it has damaged our justice system while presenting an innovative set of reforms for how we can fix it.

Anyone interested in criminal justice reform needs to understand plea bargaining because it is responsible for so much of what is wrong with how criminal law is administered in America. Carissa Byrne Hessick carefully and objectively analyzes all of plea bargaining's shortcomings and offers realistic solutions to curb its abuses. This book is a must-read for anyone who wants to tackle mass incarceration, by one of the country's most thoughtful scholars.
author of Prisoners of Politics: Breaking the Cycle of Mass Incarceration, Rachel E. Barkow —

With sound logic, empirical evidence, and appeals to our sense of justice, Carissa Hessick makes an urgent case to fix a problem unknown to much of the public. Plea bargaining may seem innocuous enough, particularly when it's used in individual cases. But the practice has become so pervasive that most prosecutors, judges, and defense attorneys can't imagine the system functioning without it. In calm, thorough, and authoritative prose, Hessick explains how this dependence on adjudicating cases without trial corrupts the core values we associate with a fair justice system. With illustrative anecdotes backed by hard data, Hessick explains how overreliance on the plea bargain has chipped away at the presumption of innocence, punishes those who exercise their constitutional right
to a fair trial, and obscures prosecutor and police misconduct.

Carissa Byrne Hessick is the Ransdell Distinguished Professor of Law at the University of North Carolina School of Law, where she also serves as the director of the Prosecutors and Politics Project. Before joining the faculty at UNC, she taught at the law schools of Arizona State, Harvard, and the University of Utah. Her work on the criminal justice system has been published by the Los Angeles Times, the Philadelphia Inquirer, Slate, and numerous academic journals. She also has one of the most informative and useful Twitter accounts for anyone interested in criminal justice. She lives in Chapel Hill, North Carolina.