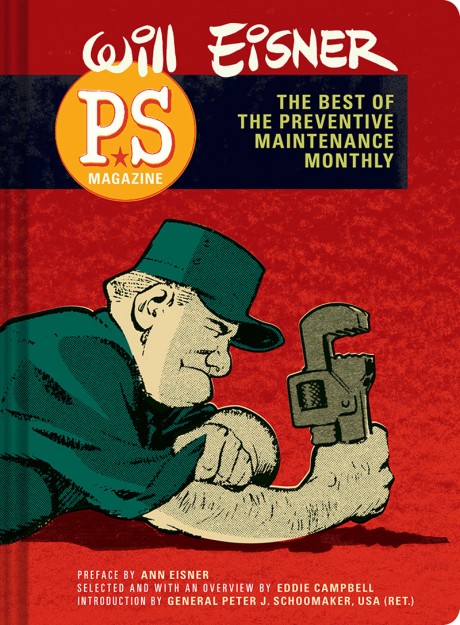 The Best of The Preventive Maintenance Monthly

Will Eisner—best known for his influential comic book series The Spirit and his groundbreaking graphic novel A Contract with God—believed in the teaching power of comics, and from 1951 to 1971 he produced PS magazine for the U.S. Army. This Preventive Maintenance Monthly (called PS because it was a postscript to the standard technical manuals) was aimed at teaching American soldiers everything about weapons safety for vehicles, aircraft, firearms, and electronics. Eisner illustrated these vital lessons in drawings, pinups, step-by-step guides, and comic strips. This collection contains the best of Eisner’s 227 issues of PS, reproduced in a portable digest format. This relatively unknown work by Eisner is finally explored—the missing link between his comic books and his later, more mature graphic novel style.

"For the first time, Will Eisner’s superlative work for the U.S. Army has been assembled into a single collection. The result shows the artist’s keen understanding of the educative power of graphic storytelling. From 1951 to 1971, between The Spirit and A Contract with God, Eisner produced PS Magazine for the army in order to teach the common soldier how best to use, maintain, repair, and requisition their equipment. From explaining how to load a truck correctly to why it won’t start, Eisner used a combination of humor, sound technical writing, and graphic storytelling to educate the soldiers. His magazines could be found at the front lines, in the officer’s mess, and in the quarters of senior military officials. It featured a cast of recurring characters like the loveable Joe Dope and the voluptuous Connie Rodd, who headlined featured segments like “Joe’s Dope Sheet” and the provocatively named “Connie Rodd’s Briefs.” With Eisner’s wonderful artwork and clarity of style making sometimes difficult concepts easy to understand, it’s no wonder PS Magazine was so popular with military personnel. A fascinating document for both fans of Eisner and military history buffs."
- Publishers Weekly starred review

“These amusing yet pragmatic sketches provide a ‘missing-link’ comics document for fans and demonstrate the same mastery of his craft that marked Eisner’s better-known works.”
—Booklist
“An instructional model for today’s producers of non­fiction comics, which too often lack such visual traction, this also has appeal for military buffs, vehicle junkies, and Eisner fans.”
—Library Journal


“The enthusiast who’s been nurturing a curiosity about Eisner’s lost years will find all he needs to know from this beautifully produced little volume.” —The Comics Journal

"Eisner understood comics' potential for education decades before his peers, and PS magazine was his first laboratory. This thoughtful new collection is an essential addition to the Eisner library."
-Scott McCloud, author of Understanding Comics

Will Eisner (1917–2005) is one of the most beloved and important creators in comics. His work includes the comic book The Spirit and more than two dozen graphic novels, including A Contract with God. The comics industry’s most prestigious award, the Eisner, was created in his honor.