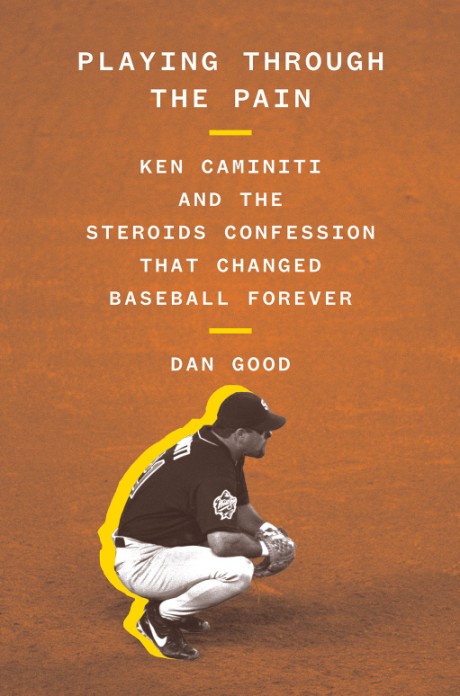 Playing Through the Pain

Ken Caminiti and the Steroids Confession That Changed Baseball Forever

The powerful story of Ken Caminiti, who changed baseball forever as the first player to confess to having used performance-enhancing steroids

In Playing Through the Pain: Ken Caminiti and the Steroids Confession That Changed Baseball Forever, writer Dan Good seeks to make sense of MLB MVP Ken Caminiti’s fascinating, troubled life. Good began researching Caminiti in 2012 and conducted his first interviews for his biography in 2013. Since then he’s interviewed nearly 400 people, providing him with an exclusive and exhaustive view into Caminiti’s addictions, use of steroids, baseball successes, and inner turmoil.

Decades later, the full truth about Major League Baseball’s steroids era remains elusive, and the story of Caminiti, the player who opened the lid on performance-enhancing drugs in baseball has never been properly told. A gritty third baseman known for his diving stops, cannon arm, and switch-hit power, Caminiti voluntarily admitted in a 2002 Sports Illustrated cover story that he used steroids during his career, including his 1996 MVP season, and guessed that half of the players were using performance-enhancing drugs. “I’ve made a ton of mistakes,” he said. “I don’t think using steroids is one of them.”

Good’s on-the-record sources include Caminiti’s steroids supplier, who has never come forward, discussing in detail his efforts to set up drug programs for Caminiti and dozens of other MLB players during the late 1990s; people who attended rehab with Caminiti and revealed the secret inner trauma that fueled his addictions; hundreds of Caminiti’s baseball teammates and coaches, from Little League to the major leagues, who adored and respected him while struggling to understand how to help him amid a culture that cultivated substance abuse; childhood friends who were drawn to his daring personality, warmth, and athleticism; and the teenager at the center of Caminiti’s October 2004 trip to New York City during which he overdosed and died.

“Drawing from almost a decade of interviews with Caminiti’s teammates and coaches, Good’s narrative is decidedly unsparing, but it offers crucial context to the ‘steroids era’ … This is a must-read for baseball fans.”

“This is an incredibly interesting book about a flawed star and his impact on the game. I couldn’t put it down.”
Peter Golenbock, author of The Bronx Zoo, Bums, Wrigleyville, and Valentine’s Way —

“Like Ken Caminiti so many times with the San Diego Padres, Dan Good has gone deep with this exhaustive biography of the 1990s slugger. Playing Through the Pain builds anticipation well in detailing Caminiti’s rise and tragic fall, threading in four hundred interviews with everyone from childhood friends to steroid dealers. Caminiti’s story is one of the secrets—childhood sexual abuse, drug abuse—that undid a generous spirit and preternaturally talented ballplayer. Good ends up with an effective portrayal of a man whose courageous willingness to blow the whistle on steroids helped clean up the game.”
Brad Balukjian, author of The Wax Pack —

“As compelling as it is heartbreaking, Dan Good’s Playing Through the Pain provides an in-depth look into Ken Caminiti’s life, both on and off the field. As his teammate during his 1996 MVP season, I witnessed Cammy’s toughness and talent firsthand. It wasn’t until I read this book that I really got to know Ken and his battles.”
Bob Tewksbury, All-Star pitcher, mental skills coach, and author of Ninety Percent Mental —