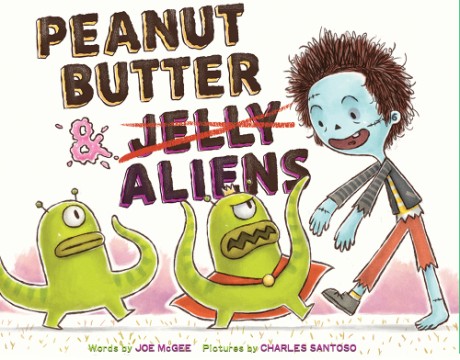 All is peaceful between the zombies and the humans of Quirkville . . . until an unexpected alien invasion causes widespread panic and chaos! As the aliens run rampant, demanding something mysterious in their alien language and coating the town in cosmic grape jelly when they’re not understood, the mayor declares a state of emergency. Once again, Reginald the zombie comes to the rescue, bravely suggesting that the seemingly evil aliens try pairing their jelly with some of his favorite peanut butter. Despite their differences, the residents of Quirkville, the zombies, and the aliens work together to create the greatest sandwich in the universe! Full of lots of humor and heart, this entertaining sequel to Peanut Butter & Brains will satisfy readers who are craving more.

Joe McGee holds an MFA in writing for children and young adults from the Vermont College of Fine Arts. His fiction and poetry have been published in both print and online journals, and he is the author of Peanut Butter & Brains. McGee lives in Pennsylvania.

Charles Santoso is a concept artist and illustrator currently living in Sydney, Australia. His work has been exhibited in Australia, North America, and France.