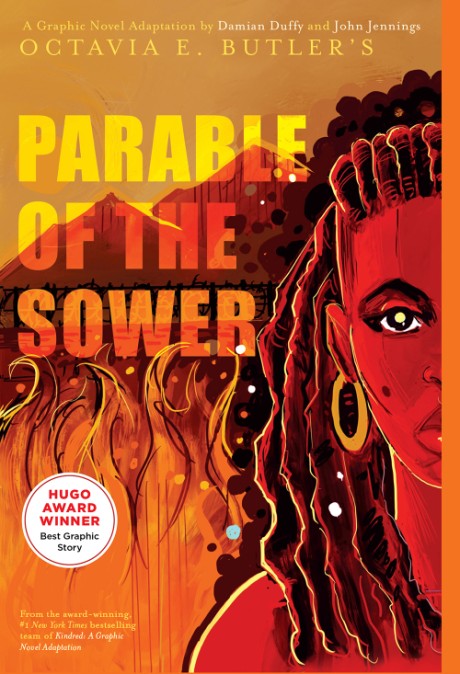 The graphic-novel adaptation of Octavia E. Butler’s groundbreaking dystopian novel, Parable of the Sower, the follow-up to Kindred, a #1 New York Times bestseller

In this graphic-novel adaptation of Octavia E. Butler’s Parable of the Sower by Damian Duffy and John Jennings, the award-winning team behind Kindred: A Graphic Novel Adaptation, the author portrays a searing vision of America’s future. In the year 2024, the country is marred by unattended environmental and economic crises that lead to social chaos. Lauren Olamina, a preacher’s daughter living in Los Angeles, is protected from danger by the walls of her gated community. However, in a night of fire and death, what begins as a fight for survival soon leads to something much more: a startling vision of human destiny . . . and the birth of a new faith.

“…the graphic novel is faithful to Butler, yet still fresh in its world building.”
— USA Today

“…Jennings’ work in the book is beyond stunning…”
— The Beat

“The Parable of the Sower graphic novel… is as faithful an adaptation as you can get. Not only does it hit all the plot points, it perfectly portrays Butler’s balancing act in regard to how far society has fallen apart.”
— Kirkus

“Duffy and Jennings have done justice to Butler’s work, losing none of the story’s richness and adding an exciting visual element that makes the reading experience even more visceral and engrossing.”
— Forward Reviews, STARRED review

“John Jennings’s work succeeds as sequential storytelling and approaches the level of iconography regularly.”
— The Believer

“Jennings and Duffy are some of the most skilled and hardest working comics creators doing the work to radically transform and diversify the comics scene.”
— Comicosity

“Jennings has captured [Butler’s] words with visual imagery in such an afrofuturistic, horror-esque way that the images jump off the page with every turn.”
— Flickering Myth

Parable of the Sower Teachi... by Abrams Books on Scribd

Octavia E. Butler (1947–2006) was a renowned African American author who was awarded a MacArthur “Genius” Grant and PEN West Lifetime Achievement Award for her body of work. Since her death, sales of her books have increased enormously as the issues she addressed in her Afro-futuristic feminist novels and short fiction have only become more relevant. Damian Duffy, author of Kindred: A Graphic Novel Adaptation and Parable of the Sower: A Graphic Novel Adaptation, is a cartoonist, scholar, writer, and teacher. He holds a MS and PhD in library and information sciences from the University of Illinois at Urbana-Champaign, where he is on faculty. John Jennings is the curator of the Megascope list and illustrator of the graphic-novel adaptations of Octavia E. Butler’s Kindred and Parable of the Sower. He is a professor of media and cultural studies at the University of California, Riverside.