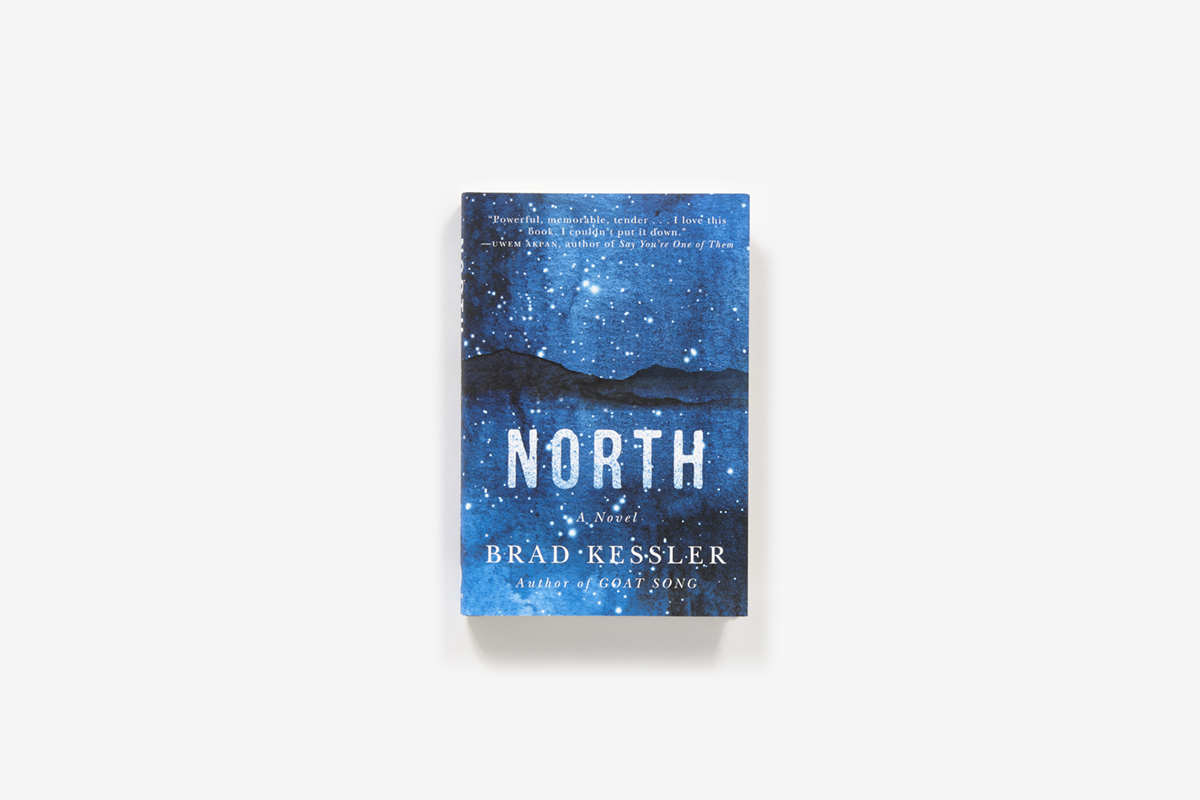 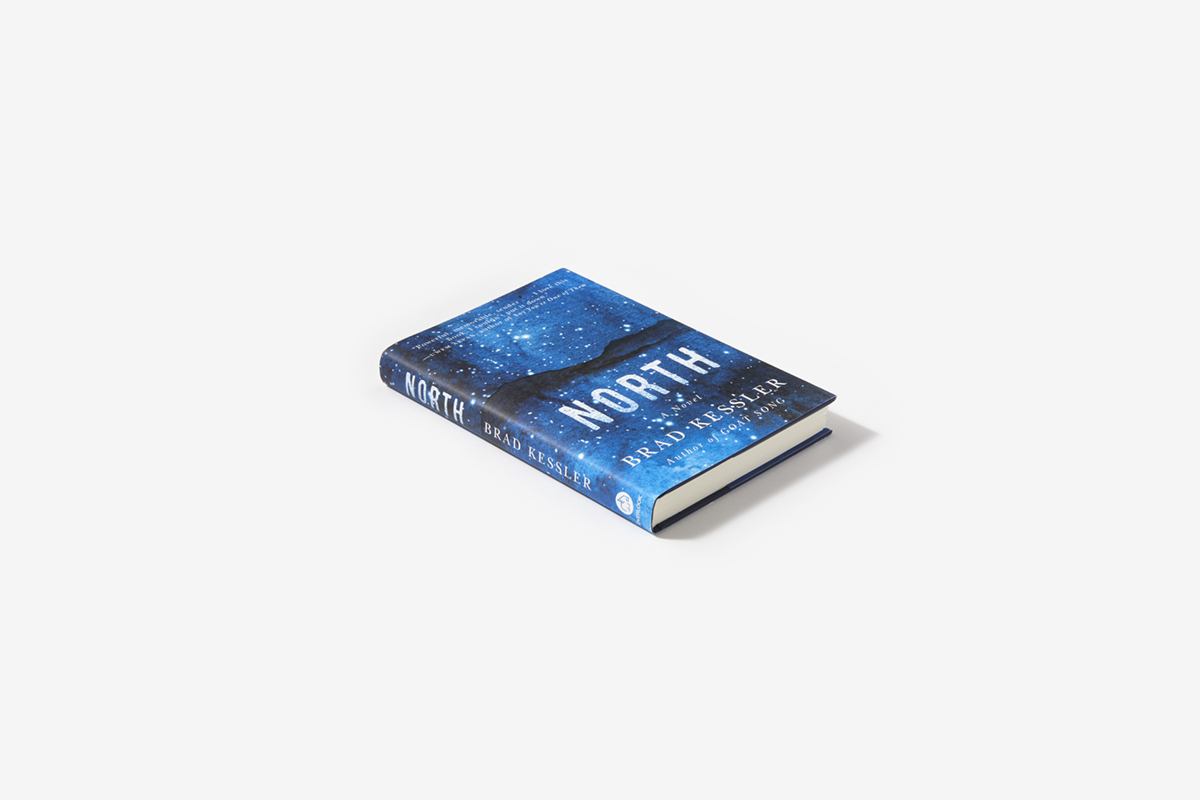 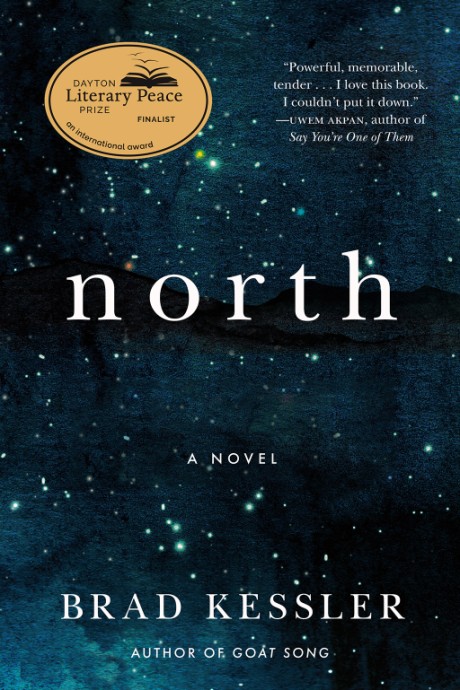 Finalist for the Dayton Literary Peace Prize
Finalist for the Vermont Book Award
A powerfully moving novel about the intertwined lives of a Vermont monk, a Somali refugee, and an Afghan war veteran by the author of the acclaimed memoir Goat Song

As a late spring blizzard brews, Brother Christopher, a cloistered monk at Blue Mountain Monastery in Vermont, rushes to tend to his Ida Red and Northern Spy apple trees in advance of the unseasonal snowstorm. When the storm lands a young Somali refugee, Sahro Abdi Muse, at the monastery, Christopher is pulled back into the world as his life intersects with Sahro’s and that of an Afghan war veteran in surprising and revealing ways.

North traces the epic journey of Sahro from her home in Somalia to South America, along the migrant route through Central America and Mexico, to New York City, and finally, her dangerous attempt to continue north to safety in Canada. It also compellingly traces the inner journeys of Brother Christopher, questioning his future in a world where the monastery way of life is waning, and of veteran Teddy Fletcher, seeking a way to make peace with his past.

Written in Brad Kessler’s sharp, beautiful, and observant prose, and grounded in the author’s own corner of Vermont, where there is a Carthusian monastery, a vibrant community of Somali asylum seekers, and a hole left after a disproportionate number of Vermont soldiers were killed in Afghanistan, North gives voice to these invisible communities, delivering a story of human connection in a time of displacement.

"Compelling and compassionate...Taut with suspense and eloquent insights, North is a novel of extraordinary scope."

“This is a powerful novel that confronts us with how we treat refugees and if we are doing enough to support them ... This is a novel you will think about long after you have finished reading it.”

“North is a powerful, memorable, tender meditation on the fate of immigrants worldwide. My heart skipped many times as I followed the hopes of Sahro Abdi Muse, the Somali protagonist, and the intrigue at the Vermont monastery where a religious community struggles to protect her from dark forces. I love this book. I couldn’t put it down.”

author of Say You’re One of Them, winner of the PEN Open Book Award and an Oprah's Book Club pick, Uwem Akpan —

“Kessler vividly renders the northern New England setting, a fitting backdrop to this emotive rendering of Sahro’s experience coupled with two characters at odds with their pasts. The characters’ moving stories coalesce into yet another winning effort from a consistently impressive writer.”

“North is a brave and ambitious novel . . . an intimate yet globe-spanning book that brilliantly combines the personal with the political. Kessler’s sensitivity to both the exterior elemental world of northern Vermont and the interior world of our hearts, souls, and minds makes for that rare thing: a book that is as transporting as it is profound.”
author of Someday This Pain Will Be Useful To You, Peter Cameron —

“Kessler’s suspenseful and compassionate novel North is the emotional compass we clutch as we wander through the inhospitable landscape of our own preconceptions and mental boundaries.”
author of Belonging: A German Reckons with History and Home, winner of the National Book Critics Cir, Nora Krug —

"A beautifully told, important, and urgent story, and we couldn’t put it down."
Literary North —

“Brad Kessler has an unusual empathy for stories. Original and deliberate in approach, he leans into the heart of difficulty and lets the sheer human dignity of his characters, no matter what duress they are under, lead the story to a hard-won but exquisite grace. This book has a distinctive tenor and a voice full of hope.”
author of The Secret History of Las Vegas, Chris Abani —

"Kessler excels at showing how faith roots itself organically in a person's experience of the world...the flashbacks abound in evocative and musical prose...Kessler suggests we've reached a point in human history when we sorely need a reminder that we're all in this together."
Seven Days —

Brad Kessler is the author of two critically acclaimed novels, Lick Creek and Birds in Fall, which was a recipient of the Dayton Literary Peace Prize, and a memoir, Goat Song. He has been awarded a Whiting, a National Endowment for the Arts Fellowship, and the Rome Prize from the American Academy of Arts and Letters. His work has appeared in The New Yorker, TheNation, the Kenyon Review, and BOMB. He lives in Vermont.