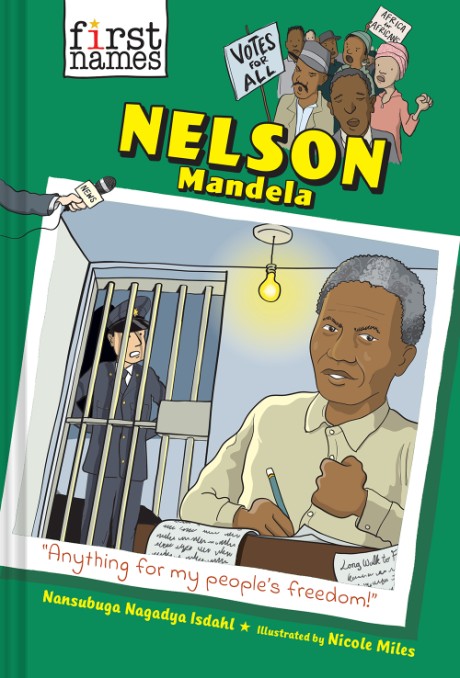 Before he was the first Black president of South Africa, Nelson Mandela (1918–2013) was a boy with a traditional Thembu upbringing. He went on to study law and become involved with African nationalist politics. The government had established an apartheid (a system of segregation that privileged white people), and Mandela worked to overthrow this system. He was arrested, accused of treason, and thrown in jail. When he was released, Mandela negotiated an end to the apartheid and was elected president. Though he was a controversial figure at the time, he is now seen as an iconic advocate for democracy and social justice. Inspiring and informational, Nelson Mandela tells the story of one of the greatest politicians and revolutionaries. It includes a timeline, glossary, and index.

**STARRED REVIEW**
"With black-and-white line drawings and a layout that incorporates traditional text with touches of comics, this biography is engrossing. . .This extensively researched and passionately told biography is an incredible resource."

"While he is lauded as a hero, Mandela is also humanized, his mistakes given as much space as his accomplishments. . .The illustrations are sure to grab and maintain reader interest and enhance accessibility."
School Library Journal —

Nansubuga Nagadya Isdahl talks about the inspiration for the book

Nansubuga Nagadya Isdahl was born to Ugandan parents in Cambridge, Massachusetts. After receiving a master’s degree in diplomacy, she began working in international development in East and Southern Africa. She currently works as a technical writer and editor for international organizations, as well as a children’s book author. She lives in Tanzania with her husband and daughter. Nicole Miles is an illustrator and artist from the Bahamas who currently lives in West Yorkshire, England, with her pet snake and human boyfriend. She’s worked with a variety of clients, including the New York Times, BuzzFeed, and Hallmark UK. Her comic Barbara was nominated for an Eisner Award.