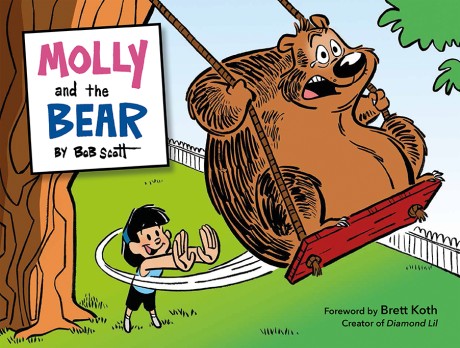 Molly and the Bear

Molly and the Bear is a comprehensive overview of the first 10 years of Bob Scott’s popular syndicated web comic. Featuring more than 400 of Bob’s personal favorite comic strips, this book showcases the quick-witted humor and delightful art that has garnered Molly and the Bear its strong and loyal fan base. The charming cast of characters, all drawn in Bob’s distinctive and endlessly entertaining style, starts with Bear, an 800-pound wild bear who is afraid of everything and allergic to his own fur. He meets Molly, an 11-year-old girl who becomes his best friend and main therapist, and with her help, Bear becomes a permanent part of the Henderson family. Though living with a bear is not always easy, it makes every day an adventure filled with silly, heartwarming, hilarious moments.

Bob Scott is a veteran of the animation industry having worked at all the major studios including Disney, Pixar, DreamWorks, and Warner Brothers. A talented and capable cartoonist, he brings his characters to life on the page like no one else­—with a particular flair for getting inside the head of an easily confused, angst-ridden bear—and as a special bonus, the book includes a step-by-step peek into Bob’s creative process. There’s truly never been a better way for new and longtime fans alike to delve into the art, fun, and hilarity of Bob Scott’s Molly and the Bear.