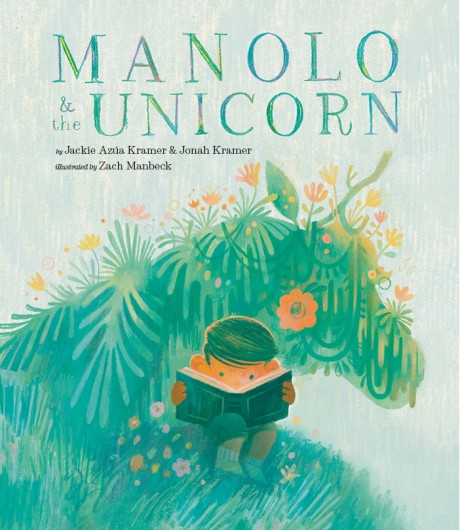 Manolo and the Unicorn

A story about seeing, believing wholeheartedly in the extraordinary—unicorns and oneself

To Manolo, the world is a magical place, a place where he searches for the most magical creature of all: unicorns. Manolo loves unicorns. When the Wild Animal Parade is announced at school, and Manolo declares that he will come as his favorite animal, his classmates say there is no such thing as unicorns, making the world feel ordinary. That is, until Manolo meets a real unicorn—wild and graceful—and discovers that the world is truly extraordinary.

Jackie Azúa Kramer is an award-winning children’s book author whose books include Dorothy & Herbert: An Ordinary Couple and Their Extraordinary Collection of Art, published by Cameron Kids. Her hopes are to write stories that reflect who children see in the mirror and what they see out of their windows. She lives with her family in Long Island, New York. Jonah Kramer is a New York City–based actor, singer, dancer, and now children’s book author. He has travelled as a performer both nationally and internationally. He is delighted to coauthor his first book with his amazing mom. Zach Manbeck is a children’s book author and illustrator who loves to create stories that advocate for characters that haven’t yet had a chance to live in books. He lives in Philadelphia.