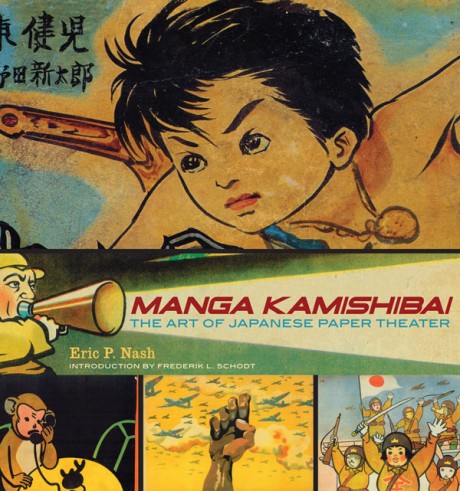 The Art of Japanese Paper Theater

Before giant robots, space ships, and masked super heroes filled the pages of Japanese comic books--known as manga--such characters were regularly seen on the streets of Japan in kamishibai stories. Manga Kamishibai: The Art of Japanese Paper Theater tells the history of this fascinating and nearly vanished Japanese art form that paved the way for modern-day comic books, and is the missing link in the development of modern manga.

During the height of kamishibai in the 1930s, storytellers would travel to villages and set up their butais (miniature wooden prosceniums), through which illustrated boards were shown. The storytellers acted as entertainers and reporters, narrating tales that ranged from action-packed westerns, period pieces, traditional folk tales, and melodramas, to nightly news reporting on World War II. More than just explaining the pictures, a good storyteller would act out the parts of each character with different voices and facial expressions. Through extensive research and interviews, author Eric P. Nash pieces together the remarkable history of this art and its creators. With rare images reproduced for the first time from Japanese archives, including full-length kamishibai stories, combined with expert writing, this book is an essential guide to the origins of manga.

Eric P. Nash has been a researcher and writer for the New York Times  since 1986. He is the author of several books about architecture and design, including Manhattan Skyscrapers and The Destruction of Penn Station. Frederik L. Schodt is an author, interpreter, and translator who has written extensively on Japanese culture and Japan-U.S. relations.