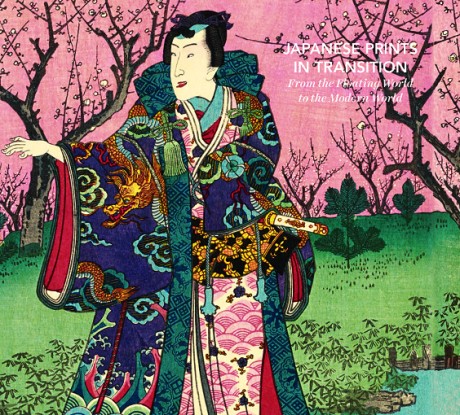 From the Floating World to the Modern World

In 1868, Japan underwent a dramatic transformation following the overthrow of the shogun by supporters of Emperor Meiji, marking the end of feudal military rule and ushering in a new era of government that promoted modernizing the country and interacting with other nations.
Japanese print culture, which had flourished for more than a century with the production of color woodcuts (the so-called ukiyo-e, or “floating world” images), also changed course during the Meiji era (1868–1912), as societal changes and the once-isolationist country’s new global engagement provided a wealth of new subjects for artists to capture. Featuring selections from the renowned Achenbach Foundation for Graphic Arts’ permanent collection, Japanese Prints in Transition: From the Floating World to the Modern World documents the shift from delicately colored ukiyo-e depictions of actors, courtesans, and scenic views to brightly colored images of Western architecture, modern military warfare, technology (railroad trains, steam-powered ships, telegraph lines), and Victorian fashions and customs.

Rhiannon Paget is the curator of Asian art at the John & Mabel Ringling Museum of Art in Sarasota, Florida. Karin Breuer is curator in charge of the Achenbach Foundation for Graphic Arts.