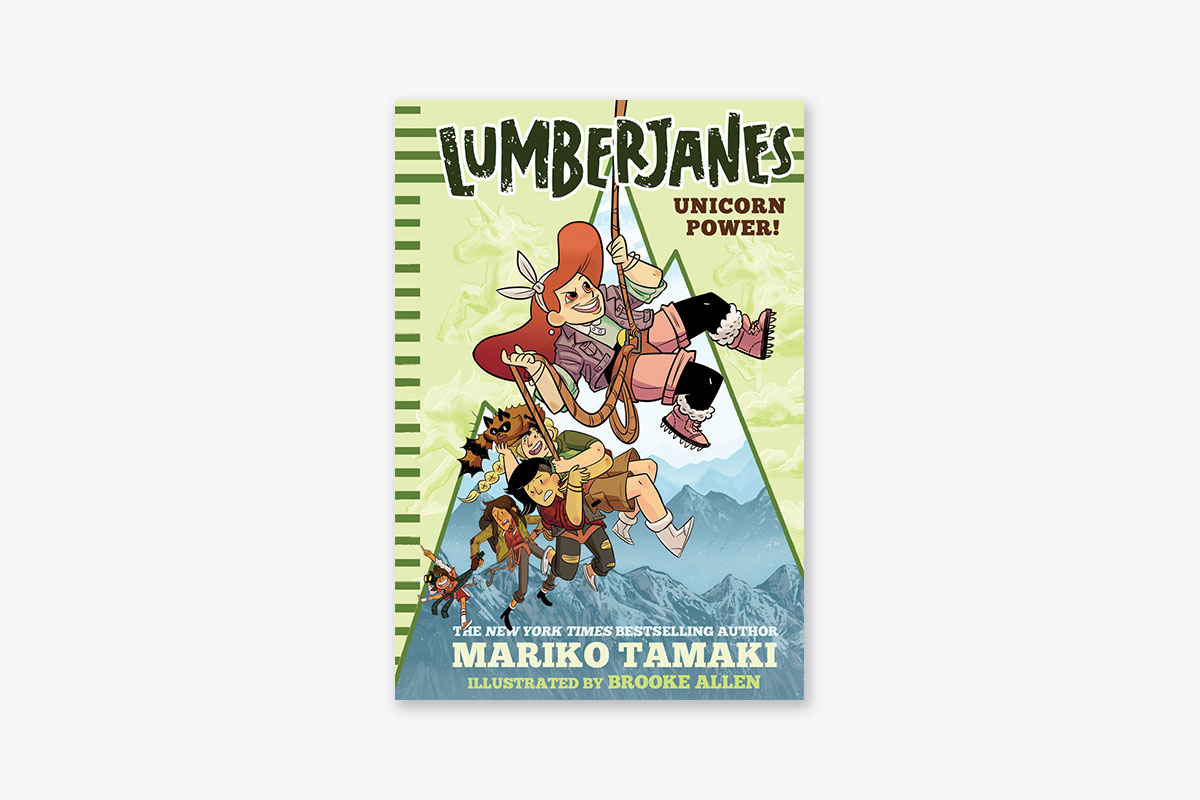 Welcome to Miss Qiunzella Thiskwin Penniquiqul Thistle Crumpet’s Camp for Hardcore Lady Types. The five scouts of Roanoke cabin—Jo, April, Molly, Mal, and Ripley—love their summers at camp. They get to hang out with their best friends, earn Lumberjane scout badges, annoy their no-nonsense counselor Jen . . . and go on supernatural adventures. That last one? A pretty normal occurrence at Miss Qiunzella’s, where the woods contain endless mysteries.

Today is no exception. When challenge-loving April leads the girls on a hike up the TALLEST mountain they’ve ever seen, things don’t go quite as planned. For one, they didn’t expect to trespass into the lands of the ancient Cloud People, and did anyone happen to read those ominous signs some unknown person posted at the bottom of the mountain? Also, unicorns.

**STARRED REVIEW**
"Without missing a beat, this novelization has successfully sustained the fun, feminist feel and lively vernacular of the beloved graphic-novel series, a notable feat...With its just-right blend of giggleworthy jokes, LGBTQ-positive characters, and affirmative emphasis on friendship, this middle-grade charmer can make even the coldest, bleakest day feel like a sunny day at summer camp."
— Kirkus

"Tamaki’s writing captures the spirit of the source material . . . ?A smart, silly, fast-paced adventure that will bring even more readers into the Lumberjanes fan club."
— School Library Journal

“…the series emphasizes the same values of inclusion, friendship, and teamwork that infuse the Lumberjanes comics.”
— Sally Lodge, Publishers Weekly

"Fans familiar with the comic series will find all five of the girls fully presented here . . . readers of the series will still want to accompany the girls on another adventure, and newbies to the quintet’s hijinks may find this an appealing invitation to the comics."
— Bulletin of the Center for Children's Books

"Full of puns, adventure, magical creatures, and girl power aplenty, this novel offers middle-grade readers a new way to enjoy Lumberjanes . . . Tamaki expertly captures the tone of the series, in both its manic plots and its narrative style, and she adds in some meaningful backstory and conflict."
— Booklist

"Mariko Tamaki's novelization brings the Lumberjanes from comic books to fiction in Lumberjanes: Unicorn Power! Enhanced with fantastic illustrations by Brooke Allen, one of the creators of the Lumberjanes comics, Unicorn Power is a hilarious and thoughtfully modern take on the classic summer camp adventure that is destined to delight."
— Shelf Awareness

GET A FIRST LOOK AT THE TOTALLY NEW LUMBERJANES ADVENTURE!

Mariko Tamaki is an artist and writer known for her graphic novel This One Summer, a Caldecott Honor Book and Printz Award winner, illustrated by her cousin Jillian Tamaki, among other notable novels. See her work at marikotamaki.blogspot.com.

Brooklyn Allen is a cocreator and the original illustrator for the Lumberjanes series and a graduate of the Savannah College of Art and Design. Brooklyn's website is brooklynaallen.tumblr.com.