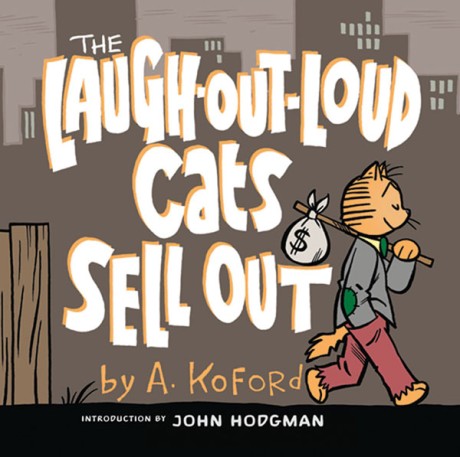 The Laugh-Out-Loud Cats Sell Out

Adam Koford's The Laugh-Out-Loud Cats Sell Out is a hilarious and charming mash-up of LOLcats (those ubiquitous online photos of cats, captioned humorously and ungrammatically) with the stylings of early 20th-century American comics, such as Walt Kelly's Pogo and George Herriman's Krazy Kat. These single-panel comic strips, drawn on "vintage" off-white paper and purportedly created around 1912 by Koford's great-grandfather, Aloysius "Gorilla" Koford, allow familiar jokes, plus references to Proust, Star Wars, Lovecraft, classical mythology, and everything in between, to transcend their origins in a fresh, inventive way.

The Laugh-Out-Loud Cats Sell Out presents the very best of Koford's online archives, alongside 30 new comics produced exclusively for this collection. An introduction by bestselling author and Daily Show correspondent John Hodgman, whose "700 Hoboes" project inspired Koford to create The Laugh-Out- Loud Cats, frames the strips for both the longtime fan and the LOLinitiate.

Adam Koford is an improbably prolific cartoonist who has been involved in several projects, including "700 Hoboes" and "Conan vs. Bear." He has been featured on Boing Boing TV and is a regular contributor to Drawn.ca. He resides in Utah. John Hodgman is the author of The Areas of My Expertise and More Information Than You Require, and a regular contributor to The Daily Show and the New York Times Magazine. He lives in New York City.