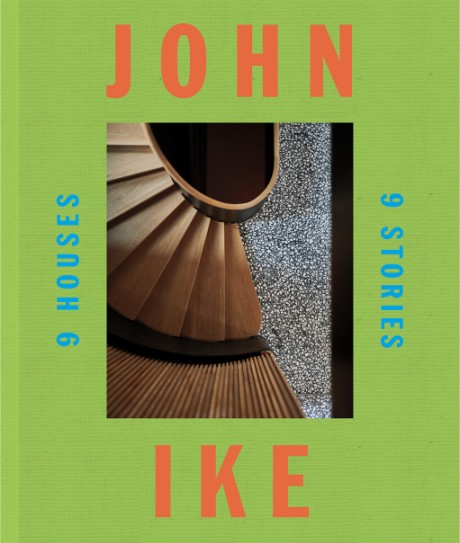 By John Ike and Mitchell Owens

A signature shingled house in a New York suburb, a renovated mid-century modern house in San Diego, a glass-and-brick house near Seattle, a beach house on the Atlantic coast, a reimagined historic building in Brooklin, Maine—the projects featured in this book vary widely in style, location, and materials, but all share a common sensibility. For John Ike, a founding partner of the award-winning firm Ike Kligerman Barkley, they are all vehicles illustrating the myriad ways architecture is created. His involvement in them ranges from mentor to principal architect and designer, but all are collaborations, and in each chapter he focuses attention on a person who was particularly instrumental in realizing the project, whether the interior designer, the landscape architect, the contractor, a craftsperson, or the client. With an authoritative text by seasoned architecture and design writer Mitchell Owens and specially commissioned photography, John Ike: 9 Houses/9 Stories explores and celebrates the inextricable bond between the architect and those who implement his vision, a give-and-take that results in singularly designed residences.

Before co-founding Ike Kligerman Barkley, John Ike worked for Robert A.M. Stern, under whom he had studied for his master of architecture degree at the Graduate School of Architecture at Columbia University. His previous books include Ike Kligerman Barkley: Houses and The New Shingled House: Ike Kligerman Barkley. He divides his time between California and New Jersey. Mitchell Owens is the American editor of the World of Interiors and a host of @indegaretravel. He was formerly decorative arts editor at Architectural Digest. He lives in New York. Architecture and interiors photographer Richard Powers has photographed more than 20 books and his work appears regularly in the US and European editions of Architectural Digest, Elle Decor, World of Interiors, Vogue, and the Wall Street Journal. He lives in the south of France.