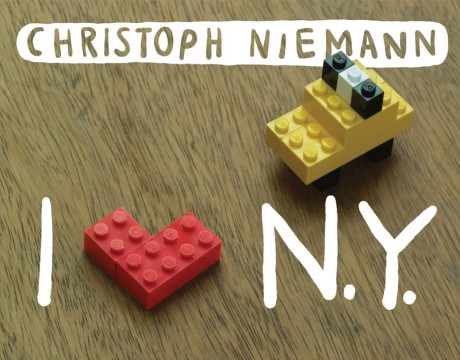 I LEGO N.Y. is an imaginative look at life in New York City constructed entirely out of LEGOs. Designer and illustrator Christoph Niemann was inspired to create a series of miniature New York vignettes out of his sons' toys after a few cold and dark winter days in Berlin. The former New Yorker then posted photographs of his creations along with his handwritten captions on his New York Times blog. Resident and honorary New Yorkers around the world responded enthusiastically to the clever and minimalist inventions, which captured both the iconic (the Empire State Building) and the mundane (man standing on a subway platform) in fewer LEGO pieces than one might think possible. This book includes all of the original images, plus thirteen new creations. The resulting collection is delightful in its simplicity and moving in its ability to cature the spirit of life in New York in so few strokes.

Christoph Niemann is an award-winning illustrator and children’s book author. He is a regular contributor to The New Yorker, Wired, and The New York Times. He has won numerous awards from the American Institute of Graphic Arts, the Art Directors Club, and American Illustration. He is the author of two children’s books, The Pet Dragon and The Police Cloud.