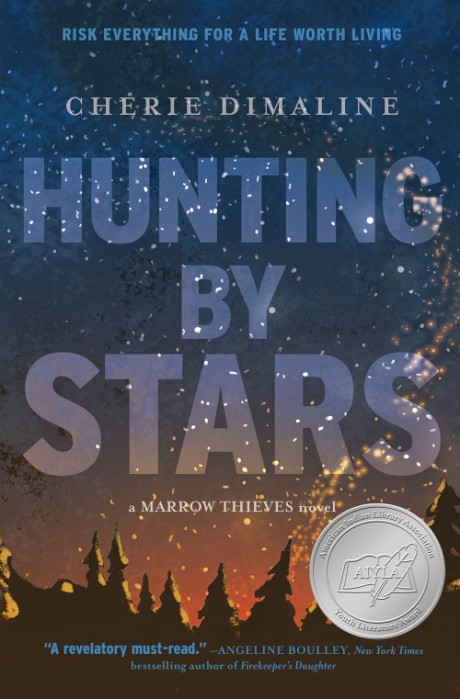 Years ago, when plagues and natural disasters killed millions of people, much of the world stopped dreaming. Without dreams, people are haunted, sick, mad, unable to rebuild. The government soon finds that the Indigenous people of North America have retained their dreams, an ability rumored to be housed in the very marrow of their bones. Soon, residential schools pop up—or are re-opened—across the land to bring in the dreamers and harvest their dreams.

Seventeen-year-old French lost his family to these schools and has spent the years since heading north with his new found family: a group of other dreamers, who, like him, are trying to build and thrive as a community. But then French wakes up in a pitch-black room, locked in and alone for the first time in years, and he knows immediately where he is—and what it will take to escape.

Meanwhile, out in the world, his found family searches for him and dodges new dangers—school Recruiters, a blood cult, even the land itself. When their paths finally collide, French must decide how far he is willing to go—and how many loved ones is he willing to betray—in order to survive. This engrossing, action-packed, deftly-drawn novel expands on the world of Cherie Dimaline’s award-winning The Marrow Thieves, and it will haunt readers long after they’ve turned the final page.

“A harrowing glimpse into a future all the more chilling because it’s rooted in history. Our marrow holds many stories. The best ones are of love, hope, and resistance. Miigwech to Cherie Dimaline for this story! Hunting by Stars is a revelatory must read.”

“Spellbinding. Straight from the heart of resilience—Dimaline shows how Indigenous people hold on to dreams even when trapped in nightmares.”
Wab Kinew, author of the bestselling The Reason You Walk —

“What a brilliant and utterly gripping book this is. Beautiful on a sentence level, kinetic, and possessed of a deep humanity. Cherie Dimaline is one of the finest worldbuilders working in fiction today, and here she has crafted something truly profound on the nature of survival, community, and the resurrective power of a story carried and told. To live up to the legacy of one of the best dystopian novels in recent memory is no small talk—Hunting by Stars does that and more.”
Omar El Akkad, author of the bestselling American War —

"Lush, devastating, and hope-filled novel. . .The action never lets up and is inextricably intertwined with the personal and community histories of the diverse characters who band together from various nations. Dimaline paints a nightmarish world that is too easy to imagine; it will haunt readers long after they turn the final page."
Kirkus Reviews —

"Dimaline has created vivid characters who propel a suspenseful and atmospheric story that boldly brings past, and ongoing, darkness to light."
Booklist —

"The brutal realities faced by French in the residential school will leave readers thinking about what Indigenous people endured in the residential schools of the past. The idea of storytelling and the importance of realizing that the past and present are interwoven is beautifully conveyed and will keep readers anxious for what comes next."
School Library Journal —

Cherie Dimaline is an author from the Georgian Bay Metis Community in Canada. Her 2017 book, The Marrow Thieves, won the Governor General’s Award and the prestigious Kirkus Prize for Young Readers, among others. The Marrow Thieves was named a Book of Year on numerous lists, including the National Public Radio, the School Library Journal, the New York Public Library, the Globe and Mail, Quill & Quire, and the CBC, has been translated into several languages, and continues to be a Canadian national bestseller years later. Cherie lives in Canada, where she is adapting work for stage and film and working on her new novels.