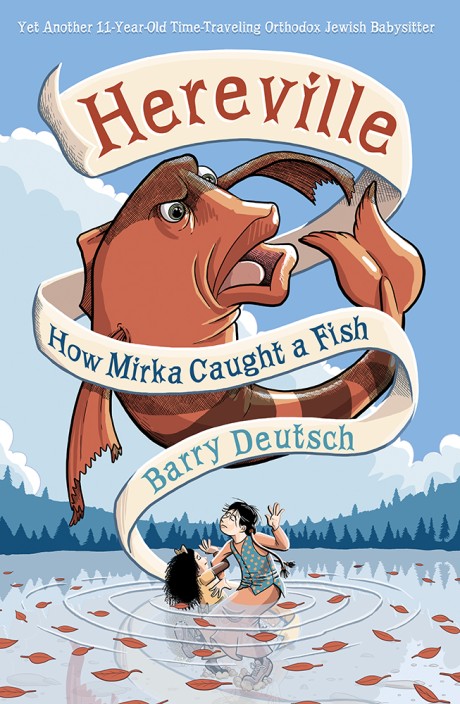 Buy
Hereville
How Mirka Caught a Fish
By Barry Deutsch

Welcome back to Hereville, where Mirka, the world’s first time-traveling, monster-fighting Orthodox Jewish girl, faces her greatest challenge yet: babysitting! Mirka just wants to find new adventures, but instead she’s stuck babysitting her disapproving little sister, Layele. When Mirka pushes her sister into a stream, they both get in too deep with an angry magic fish. No matter how hard Mirka fights this fish-out-of-water, it gets stronger and stronger—and it’s out for revenge. Mirka is in over her head, and this time, her whole family is on the line! When the fish kidnaps Layele, Mirka must find a way to save her little sister, and the clues she needs are hidden in her stepmother Fruma’s past. Mixing adventure, cultural traditions, squabbling siblings, and preteen commotion, Hereville: How Mirka Caught a Fish is sure to captivate readers with its exciting visuals and indomitable heroine.

"Deutsch has created a wonderfully inventive world, in which fantastic creatures believably reside alongside a religious community; Mirka is a delightfully flawed heroine that nearly anyone can relate to and enjoy. Backgrounder Wallace and colorist Richmond augment Deutsch's busy panels, providing a pleasingly earth-toned setting for Mirka's latest adventure. This consistently clever and thoughtful series hasn't lost a particle of momentum."
— Kirkus

**STARRED REVIEW**
“Though the expressive and often humorous illustrations in this graphic novel do much to convey each scene’s tone and highlight important characters and objects, words make the world go ’round here. (Check out Mirka’s punctuation-marked skirt!)”
— The Horn Book

Barry Deutsch attended the School of Visual Arts in New York City and Portland State University. He won the 2010 Sydney Taylor Award and has been nominated for Eisner, Harvey, Ignatz, and Nebula Awards. He won the national Charles M. Schulz award for best college cartoonist and was nominated for ComicCon’s Russ Manning Award for Promising Newcomer. He lives in Portland, Oregon.