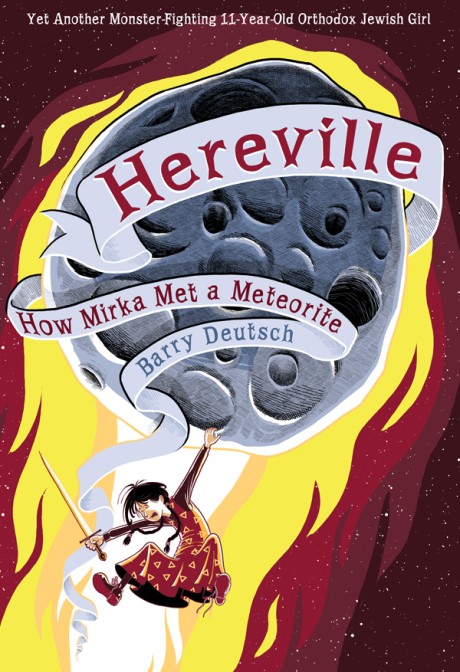 How Mirka Met a Meteorite

Welcome to Hereville, home of the first-ever wisecracking, adventure-loving, sword-wielding Orthodox Jewish heroine. A delightful mix of fantasy, adventure, cultural traditions, and preteen commotion, this fun, quirky graphic novel series will captivate middle-school readers with its exciting visuals and entertaining new heroine.
Mirka is back, and she's still the only sword-brandishing, monster-fighting Orthodox Jewish girl in town. Or so she thinks.
When a misguided troll aims a meteor at the witch's house, the witch grabs hold of the closest thing possible to transform the flying, flaming rock—and that would be Mirka's hair. The meteor is changed, all right: it's now Mirka's identical twin.
Doppelganger Mirka, vowing to be a better version of the real girl, sets out to charm all of Hereville, including Mirka's own family. Our heroine challenges the meteor girl to a three-part contest . . . and the loser will be banished from Hereville forever!

Praise for Hereville: How Mirka Met a Meteorite:
STARRED REVIEWS
"Deutsch has created a wonderful world in Mirka's insulated Orthodox village and continues to capture it adroitly... Mirka is unflinchingly likable because she is so tempestuous and inexact, and really, who can't relate to that? This truly clever series is lots of fun."
—Kirkus Reviews, starred review

"The color illustrations are as crisp and clear as they come. The endlessly creative panel and perspective work adds visual interest and gives experienced graphic-novel readers plenty to savor. A well-crafted addition to a truly distinctive series."
—School Library Journal, starred review

"She's both a fish out of water (she dreams of being a sword-wielding dragon slayer) and committed to her Orthodox Jewish faith, family, and community. All of this makes her one of the most original and comically endearing heroines to come down the pike in a long time."
—Publishers Weekly, starred review

"The graphic novel format serves the quirky story well, with strong inks and a subdued palette that emphasize characters' personalities and facial expressions as well as the tale's action. As with Mirka's first adventure, this volume brings diversity and wit to comics for young teens and tweens..."
—The Horn Book Magazine

"Deutsch is a masterful storyteller with both realistic kid patter and expressive cartoons—not only of Orthodox life but also of assorted trolls and other mostly benign fantasy creatures. A spunky adventure in kid-accessible truths revealed through the employment of fantasy."
—Booklist